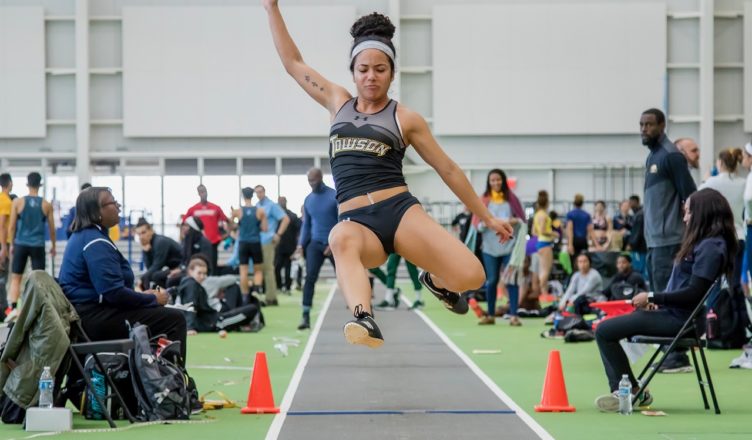 “I thought we were looking for some breakthroughs,” head coach Mike Jackson said. “Some of it happened. Some of it didn’t. So I just told the team after the meet we can most certainly do better and so looking to move forward, get back to practice and focus on ECACs now.”

“It was solid,” Jackson said. “She hasn’t been feeling great in practice, so we just wanted to get out there, get her a rep, some repetition and it’s always good for her to be able to win. That was solid.”

Sophomore Hayley Horvath finished first in the pole vault with a mark of 4.00m.

“We took some chances trying to move up to some other heights, but she’s been consistently good all year,” Jackson said.

“They’re just better than everyone else,” Jackson said. “The competition wasn’t very strong so that’s something that we expected. They’re doing what they’re doing.”

Obijiaku won the weight throw with a toss of 19.99m while junior Elisia Lancaster came in second with a mark of 19.74m. Georgia Coleman took third throwing 17.40m while sophomore Julia LaPorta finished fourth with a toss of 16.11m.

“Same thing,” Jackson said. “We’re obviously just better than most. We have a top 10 or top six group in the country so it’s not going to be too often where we’re not dominant.”

Sophomore Ani Boghossian-James had a mark of 1.55m in the high jump taking second place. Junior Adia Cavalier placed third in the long jump with a mark of 5.33m.

Some of the Tigers will compete in the Eastern College Athletic Conference (ECAC) DI Indoor Championships between Friday, March 6 and Sunday, March 8 in Boston, Massachusetts.

“Just mental preparation, talking to them about the plan and what we feel about how good they can be and playing to win,” Jackson said. “Last year we got third so we want to win this year.”