In their biggest game of the season so far, the Tigers snapped their four-game winning streak with a 63-56 loss to conference-leading James Madison.

“I thought we watched them. Instead of us moving in position to rebound, we just kind of watched,” said Head Coach Diane Richardson. “That’s just not Towson basketball, so we’ve gotta definitely work on that.”

Towson was aggressive defensively, finishing the game with six steals and 12 forced turnovers. However, the Tigers couldn’t take advantage of those turnovers, managing just seven points off of them.

There was a scary moment in the third quarter when redshirt junior guard Q. Murray went down with an ankle injury. Murray remained down for a few minutes as a silent SECU Arena looked on. She would return to the game and finished with six points.

“I just know that I was gonna finish the game,” Murray said. “I didn’t care if they said it was broken, I’m the floor general, I have to do whatever I can to the best of my ability to go out and help this team.”

In Murray’s absence, senior guard Danielle Durjan, who got off to a hot start in the first half, filled the void well and finished the game with 13 points on 5-of-6 shooting, including a perfect 3-for-3 from three-point range.

“When they need me, coming in to contribute as much as I can,” Durjan said.

Towson built its largest lead of the game in the third, but watched it disappear due to a 9-0 James Madison run as the Dukes led 37-36 going into the fourth.

In the final quarter, James Madison enforced its will onto the Tigers and built a nine-point lead with just over three minutes to play. Efforts from redshirt sophomore guard Kionna Jeter and junior forward Nukiya Mayo late in the game wouldn’t be enough as Towson suffered their second home loss of the season.

The Tigers remain in third place in the conference standings, one game ahead of their next opponents, the rival Delaware Blue Hens.

“We’ve gotta get up for every game.” Richardson said, “We like to take it one game at a time and we’ll be prepared.”

Towson and Delaware will face off at 7 p.m. on Thursday at SECU Arena. The Tigers will finish the regular season with a home game against the Drexel Dragons on Saturday, March 9 at 2 p.m. 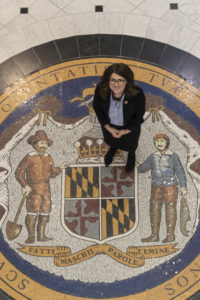