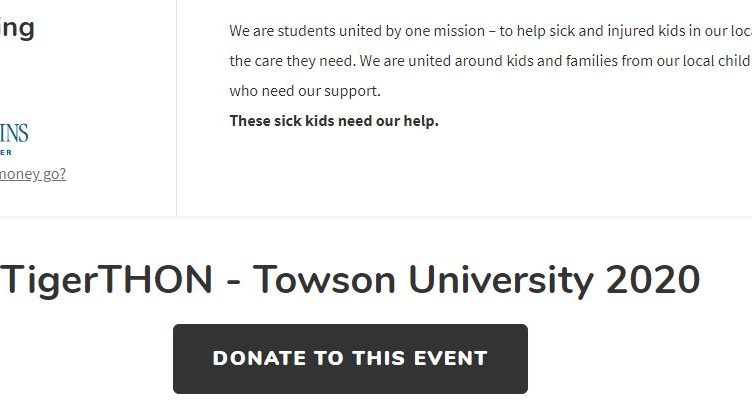 This year, Towson University saw a loss in donations for their annual TigerTHON, a 12-hour dance marathon fundraiser for the Children’s Miracle Network Hospitals, after it was moved online due to COVID-19.

The event ended up raising $104,798, compared to $173,183 last year during their annual dance marathon fundraiser.

Through Facebook and Instagram live, $3,860 was raised during the event, according to committee financial director Alanna Stefano. $100,938 of donations came from preceding donations before the online event even took place.

Former Phi Mu president and fourth-year contributor to TigerTHON, Jillian Procope, believes not only the movement to an online platform, but the employment crisis “affected people’s ability or willingness to continue donating.”

With social-distancing, people self-quarantining, and many lost jobs, Procope saw a potential fall in donations as a direct result, though she was still hopeful “it would just affect day-of fundraising.”

Sigma Alpha Epsilon president Andrew Murray is committed to “making up for the loss this change could cause.” Phi Mu and SAE both dedicated their philanthropies to the Children’s Miracle Network Hospitals, specifically John’s Hopkins.

“We still wanted to raise the ultimate amount of money,” said committee president Nicolette Ficca. “We wanted to make sure all the hard work from our participants wouldn’t go unrecognized.”

According to Ficca, participants were offered raffles, fundraising shout-outs, and challenges, not unlike the in-person event.

TigerTHON committee member Sophie Karasik was confident they would be able to raise money.

For many participants, the event is also a way to bond with fellow students. Sophomore Lauren Williams “got closer to people [she] wouldn’t have met otherwise” at her first TigerTHON as a freshman. Williams remembers the whole 12 hours as “such a good experience.”

“Spending 12 hours with someone really helps get to know them so it was definitely a good place to scout for a date to formal,” Kelly said.

Although the event got moved online, Ficca was happy to be able to still conduct the event, as it took a lot of planning.

“The event takes tons of planning, meetings, webinars, and networking and it would be sad to let it go to waste,” Ficca said.