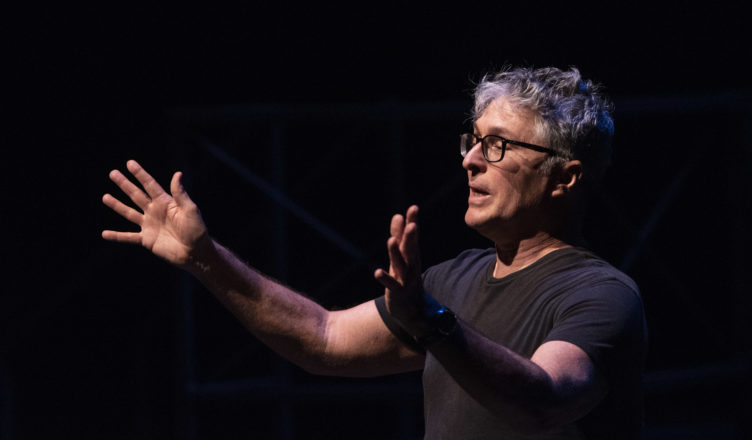 Towson University’s Department of Theatre Arts hosted a performance by internationally acclaimed performance artist, Tim Miller, which took place at the Mainstage Theater in the Center For the Arts on May 7.

The performance was scheduled by Robyn Quick, a professor in theatre history and dramaturgy and chair of the Department of Theatre Arts, and Steven Satta, a professor of voice and acting.

Miller was originally asked to come back in wake of an incident on campus last fall, concerning two gay students who were harassed near campus. It just so happens that the scheduling of his performance fell just after the protest of the “Bible Believers,” which happened on campus a couple weeks ago. This incident contained hate speech directed towards numerous groups, including the LGBT+ community.

“Tim’s been here before, he’s come here a couple of times for a number of different reasons, as an artist and an activist on both,” said Satta. “Unfortunately, the protest of the Bible Believers just made it even more of an imperative conversation on campus.”

As a performance artist, he explores the identity of being a gay man through personal and body narratives as well as touching on activism. Miller’s work can be represented in his pieces such as “My Queer Body” (1992), “Glory Box” (1999), “1001 Beds” (2006), and many more. He has taught at numerous universities across the country, including UCLA, NYU and the School of Theology at Claremont.

“I do lots and lots of university residencies[…] to generate material around the identity, around social topics and [around] texts that matter to them a lot,” said Miller.

In 1990, Miller was rewarded with the NEA Solo Performer Fellowship, which ended up becoming revoked due to political pressure from the Bush administration regarding the gay themes of his work. His case went to the Supreme Court, who decided in 1998 that “standards of decency” are required for a federal fund for the arts.

Since 1999, Miller has shifted his focus to the social injustices that gay and lesbian couples face in marriage.

His performance itself was structured differently from typical performances. Miller would set the scene, provide an introduction, and explain his thought process after the scene, describing what he wanted his audience to feel and see. The scenes derived from a variety of his shows, the first two scenes being from “Glory Box,” and the last one being from his new show, “A Body in the O.”

One scene which left an outstanding message, was one in which Miller retold a childhood memory. The memory was from when he was just nine years old, and in love with a boy. When the boy announced that he was going to marry a girl from their class, Miller jumped to announce that he would marry him. He was put in a situation where he had to take back what he said. Miller explained how that scene always stuck out due to the resounding idea of social justice and activism which is suppressed in childhood, depending on the truth that children speak.

Miller spoke extensively about what theater has done for activism, and how he has used theater to spread awareness on HIV/AIDS. He mentions that through theater, and through activism, the LGBTQ+ community keeps pushing forward. The community keeps exhibiting their strength.

“We’re not victims and we aren’t going to go quietly,” Miller asserted.

An exceptional element of Miller’s performance is humor. While it is a theatrical technique, he also describes it as being a sort of defense mechanism in order to “turn oppression on its head.”

“It builds trust with the audience, when you’re provoking and also prodding people into thinking about things that might be troubling to them, I develop resistance,” said Miller. “It can help keep them in the room, keep them with you.”

Miller’s jokes and jabs are part of what makes his performances so captivating.

“I personally am really interested in clear theater and my final project as a one man show, exploring a similar themes to his work,” said Jared Hanson, MFA grad student, and participant in Miller’s Towson workshop earlier that day. “I was really interested to see what I could learn to apply to my own work. I look forward to talking more with him about his creative process and the ethical elements to incorporate in my own work.” Miller’s latest project is his new, fifth book, titled ‘A Body in the O’, which was published in 2019. The title comes from an excerpt in Shakespeare’s “Henry V,” which describes how the emptiness of the wooden o-shaped stage can be filled with creativity. For more information about Tim Miller and his work, check out his website, www.timmillerperformer.com.