President Joe Biden has made himself clear on the issue of immigration: reform, reform, reform. He opposes abolishing the Immigration and Customs Enforcement agency (ICE), and plans to appoint a secretary to the Department of Homeland Security (DHS) to that end.

However, Biden has a small problem in his effort to reform immigration, and that is ICE officers blatantly disregarding his authority, by ignoring halts to deporations, even beyond those struck down by the Texas Judge. ICE deported numerous individuals not fitting the criteria laid by then acting Secretary of Homeland Security David Pekokse, that criteria being threats to public safety like convicted felons and suspected terrorists, as well as migrants who arrived after Nov. 1, 2020.

I’m curious how Biden will respond to this defiance. Personally, I don’t think he’s going to meaningfully challenge this insubordination because he doesn’t see ICE as a threat. This couldn’t be farther from the truth, and an inability to gauge such threats is a mark of the weak leader that I believe Biden will be.

I’m of the opinion that the DHS, not just ICE, is a dysfunctional, impotent, irreformable agency born of the xenophobia of the post 9/11 era and needs to be abolished for the good of the country. After  9/11, the Bush administration constructed the DHS, clearly as a vanity project, and as a veil for the failures to thwart the attack.

Lest we forget how the DHS separated families at the border, and provided no accountability for the numerous rapes committed against the children imprisoned, or, how the DHS was used to crush protests in Portland, against the wishes of the city and state.

These problems are inherent to the department, evident by their inordinately fierce resistance to the incoming administration, so much so that former Trump-aide Stephen Miller, applauded their defiance. A governmental body picking and choosing the most favorable candidate to their own ends to throw their weight behind only occurs in failing states. I’m reminded of the Praetorian Guard in the waning days of the empire, sticking their hand where it doesn’t belong and overstepping their authority.

A bureaucracy is what it is because it’s apolitical; it strives to implement the law under a rigid hierarchy, with an elected official setting the agenda. A political bureaucracy is just a competing faction, one that isn’t answerable to the public and legislates behind red tape.

I believe this is unacceptable, and it’d be dangerous for Biden to allow it to continue. Despite his best wishes, I don’t believe Biden can reform a department that so enthusiastically threw their weight behind Trump’s xenophobic rhetoric, a department that from its inception has vilified and attacked immigrant communities, uncaringly attacking U.S. citizens in the cross fire, and a department that disregards chain of command, acting of its own accord. I think only abolition can stymie their threat to the American people. 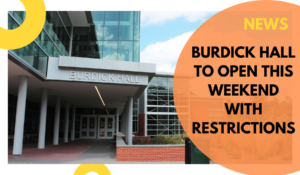 Previous post Burdick Hall to open this weekend with restrictions