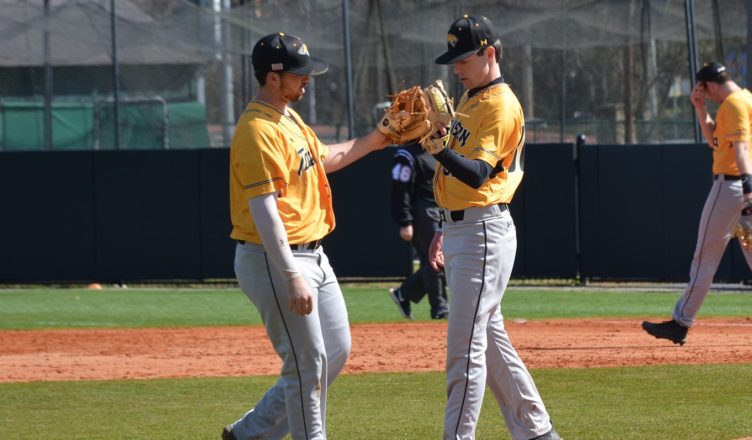 The first mid-week matchup of the season did not go well for the Tigers. Towson struggled to find its bats for most of the game, falling 8-3 on Wednesday afternoon to the West Virginia Mountaineers In Morgantown, West Virginia.

Speed was the enemy early on as the Mountaineers stole five bases in the first four innings, including three from junior outfielder Brandon White. West Virginia would finish the game with six steals.

“You’ve gotta have the confidence to pick somebody off,” Tyner said. “West Virginia has speed at the top and they have speed at the bottom.”

“That’s a young kid on the mound,” Tyner said. “We’re working on some things and he’s gonna be a fine pitcher.”

It wasn’t until senior infielder Zach Piazza launched his second home run of the season, a two-run blast in the seventh inning, did Towson feel any signs of life. The Tigers would add another run on a RBI groundout by junior infielder Colin Conroy, trimming the deficit to 6-3.

It didn’t take long for West Virginia to respond, adding two more runs in the eighth off of a pair of Towson errors. The Tigers would load the bases in the ninth, but couldn’t bring anybody home.

After traveling for the first two weeks of the season, Towson will finally get a taste of home as they welcome the Lehigh Mountain Hawks to John B. Schuerholz Park for their home opener.

“The coaching staff is confident in this team, but the team may not be,” Tyner said. “Maybe playing at home will jumpstart their energy.”

The first game, scheduled for Friday, March 1 at 2 p.m., was postponed, due to inclement weather. A double header is expected on Saturday, March 2.