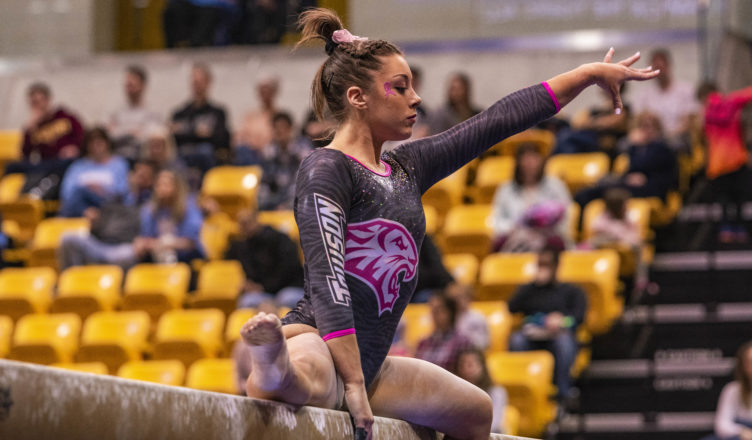 As one of the gymnastics team’s seven freshmen, Camille Vitoff is still getting used to the traveling required in the competitive world of collegiate competitions. But having teammates to spend time with can make the trip seem short. Yet Vitoff, a native of Phoenix, Arizona, doesn’t feel flustered all that much with the distance to some of the recent away meets.

Before away meets such as the one that the Tigers competed in State College, Pennsylvania vs. No. 23 Penn State, the team will do interval stretching and running during travel stoppages and tight up to before the competition to help stay loose.

“I think that being on the road is kind of normal to us now, especially the upperclassmen,” Vitoff said. “Obviously us freshmen are definitely still getting used to it. But sometimes it is hard being on the road for longer trips but at this point, three hours is like nothing to us.”

However, one outside factor that can effectively tighten up a gymnastics team is stiff scoring from judges. Both Vitoff and head coach Jay Ramirez felt a few times during Saturday’s competition that such was the case, but both felt the team was ultimately able to move past the controversial low scoring after the fact and persevere.

“Honestly, I think they did well,” Ramirez said. “The floor scores were running a little low. So I think they did clean up different parts of the floor routine. I don’t think [the judges] were harsh on scoring throughout, I just think that floor was a little lower than what we expected.”

Vitoff, who competed on the vault, balance beam, and uneven bars, noted “having the scores a little lower than we were hoping for or expecting is definitely a little bit discouraging. But I think that the team did really well, especially coming off of floor where we weren’t scored as we wanted to be scored.”

Although Ramirez felt the team did have its struggles on the floor, he also was equally impressed with how they were able to bounce back after, noting their strong perforce on the vault led by Vitoff’s 9.825, junior Kyla Gamble’s 9.800 and freshman Lauren Bolen’s 9.775. All three either tied or set a new season high on vault.

In the uneven bars, Ally Wesoly led the Tigers with a 9.775 while Vitoff and junior Tess Zientek scored a 9.700. Wesoly’s score was a season high, she also scored 38.750 in the all-around. On floor, freshmans Paige Casper and Amy Stewart, and sophomore Nikki Borkowski each scored a 9.675.

“I think the message is consistently doing your job in the gym and bringing it to the competition,” Ramirez said. “Or, it works to a certain extent, we just have to keep getting there with the experience of the entire meet.”

Towson returns to SECU Arena on Friday, March 6 at 7 p.m. against George Washington and Maryland.