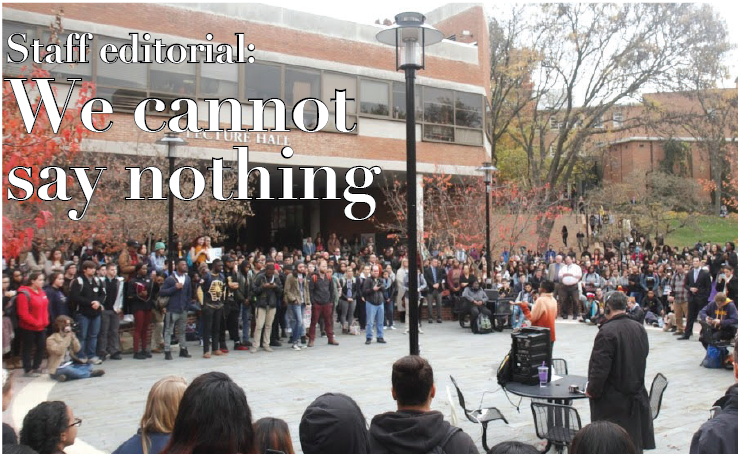 Like many people and organizations–including President-elect Trump’s own campaign–we never thought that he would win. It is not common for The Towerlight to publish a staff editorial. But this week, after the election and after violence on our own campus, we cannot stay silent.

We cannot say nothing while the president-elect decries the New York Times and protesters on Twitter, but does not, publicly, loudly and repeatedly, decry acts of hatred and racial violence committed in his name.

We cannot say nothing while the president-elect, the man who will have possession of the nuclear codes, is the same man who had to be locked out of his own Twitter account by his campaign staff.

We cannot say nothing while the president-elect says he will deport millions of people living in this country who are working hard and contributing to their communities and local economies.

We cannot say nothing while the president-elect publicly says that climate change is a Chinese hoax, instead of acknowledging it as an existential threat to our species’ survival.

We cannot say nothing while the president-elect affirms that he wants to dismantle the Affordable Care Act, which would take healthcare away from millions–including some members of our staff.

We cannot say nothing while the president-elect is a man who said he wants to “open up” libel laws, placing the Constitutionally-protected freedom of the press in danger.

We won’t pretend that we’re facing an easy time under the administration of soon-to-be President Trump. And yet, we reject the notion that all hope is lost.

We reject the notion that our country is inhabited by bigots and racists, because we know that not every Trump supporter is hateful–some, and we believe many, are hurting.

We reject violence committed at protests and rallies, because violence is never the solution and our democracy depends on the peaceful transition of power.

We reject the idea that there is nothing that anyone who voted against Trump can do, because there are ways to organize and volunteer and donate and plan and protest.

And, while times are grim, people are afraid and our country is undoubtedly facing an immense challenge, we are heartened by the good we’ve seen.

We are heartened by people making donations to nonprofits that will fight for values that the president-elect has rejected.

We are heartened by peaceful protests that scream, loudly, that President-elect Trump does not represent all the values of the American people and that he’s got a lot of catching up to do.

We are heartened that newspaper subscriptions are skyrocketing in the face of this election.

We are heartened that donations to the American Civil Liberties Union have gone up since the election result.

And, most of all, we are heartened by acts of love and kindness of which we are all still capable.

We are heartened and made hopeful because of people who are actively and continuously rejecting hatred.

We can’t pretend that things will be easy, especially for underrepresented and oppressed groups. Already, after Election Day, things have been made more difficult for women, people of color and congregants of a local church.

However, we also remember that the wheels of government grind slowly. We remember that millions of Americans voted for someone who wasn’t Donald Trump and rejected the rhetoric of his campaign. We remember that this country is still a republic where our votes still matter and where we can still make our voices heard.

We won’t, we can’t, we refuse to believe it will be easy. But we believe that we can come out stronger, because together, we can continue to stand for the democratic values we believe in and that our country was founded on. We can stand together, stronger, and insist that our voices be heard and that we lift up the voices of the oppressed.

The great thing about this country is that it doesn’t just belong to the people in power. It belongs to all of us–the people who the power comes from.

Let’s not forget that. And let’s get to work.