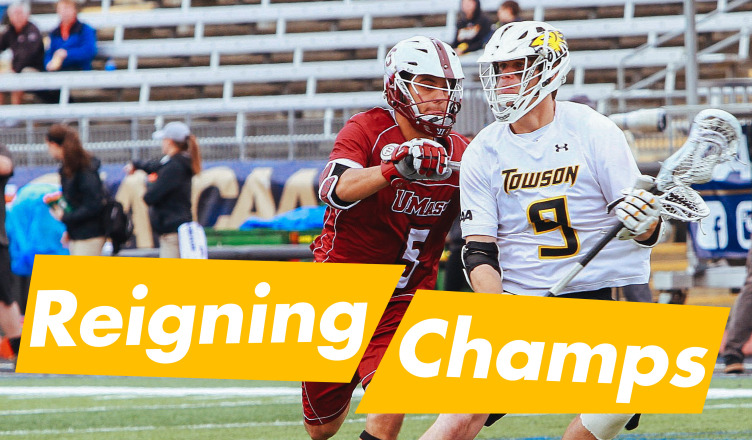 Towson learned Sunday that it will face former CAA rival Penn State in the opening round of the NCAA Tournament Saturday. Penn State enters the contest as the No. 8 team in the country, while Towson ranks 12th.

“We started watching film immediately after we learned we would be playing them,” Towson Head Coach Shawn Nadelen said. “We want to be on the same page, put together a complete game, be smart with the ball and pump out goals.”

Although history favors Towson in Saturday’s matchup, Penn State has home field advantage and will be a tough opponent. The team hung tough with No. 1 Maryland in two contests this season. But Nadelen is ready to tackle the challenge head-on.

“We have the logistics of the field and the experience of going up there,” he said. “We want to be successful and step on the field ready to play.”

The Tigers will also have one of the hottest goalkeepers in college lacrosse in the cage come Saturday. Senior Matt Hoy earned the CAA Tournament’s Most Outstanding Player honors. During the Championship run, Hoy allowed just eight goals in two games.

Another big factor in Towson’s matchup with Penn State will be the performance of sophomore midfielder Alex Woodall in the face-off circle. In the CAA Tournament, Woodall won 22 of 32 to draws.

Towson’s run to its spot in the NCAA Tournament ended with a 9-4 win over the University of Massachusetts, Minutemen, Saturday at Johnny Unitas Stadium.

“I couldn’t be more proud of these guys for earning the championship today and more honored to be able to share a locker room with them,” Nadelen said in a post-game interview. “Through the season we’ve had a lot of turbulence, but these guys have done a great job of being able to stay focused.”

The Tigers got out to a fast start against the Minutemen (7-8, 4-3 CAA). On their first offensive possession, senior midfielder Tyler Young collected a rebound off the crossbar and scored.

Play went back-and-forth early, but Towson took a 2-1 lead when sophomore midfielder Zach Goodrich collected the ball at midfield, bolted into the attack area and fired a shot past senior goalkeeper D.J. Smith.

In the second quarter, the first goal came nine minutes in when the Minutemen scored on another man-up opportunity. Redshirt senior midfielder Dan Mulle beat Hoy to make it a 4-2 game.

Late in the third, the Minutemen attempted to capitalize on another man-up opportunity to get back in the game. However, Hoy stood firm and made a crucial save that enabled the Tigers to kill the penalty and keep it a 5-3 game.

In the final stanza, Towson scored just six seconds in to take a 7-3 lead. Woodall won the opening face-off and drove down the heart of the defense to score.

Midway through the fourth quarter, the Tigers attack pressured the Minutemen into a crucial mistake. In an attempt to clear, junior defenseman Shane Rinkus put the ball into the back of his own net to put the Tigers up 8-3 lead.

Drenner scored one more goal for the Tigers’ with a minute to play by taking advantage of Smith being out of the net when the Minutemen goalkeeper attempted to pressure the Tigers attack.

“I’m spoiled in the net, I almost never see offense or middies having their hands free on shots,” Hoy said. “Almost every time it felt like in the first half I was seeing a shot, the attacker was fading away from the net. That gives me a huge advantage because it takes a lot of speed off the ball, and they’re getting pushed out farther away from the net, so I have more time to react.”

Towson earned its right to play in the CAA Championship Game by defeating Drexel 8-4 Thursday at Johnny Unitas Stadium in the semifinals round.

“We earned a tough CAA win against Drexel,” Nadelen said. “I’m proud of my guys for staying mentally focused and capitalizing on a lot of opportunities.”

The Tigers got on the board just two minutes into the first quarter when senior attackman Tyler Konen ripped a shot into the upper right corner of the net. However, the Dragons (6-8, 3-2 CAA) netted a goal and tied the game 1-1 with 5:05 left in the first.

In the second quarter, Drexel took its only lead of the game when freshman defensive midfielder Cam Harris ripped a shot past Hoy to give his team a 2-1 lead.

Following Harris’ tally, the Tigers scored three unanswered goals to take a 4-2 lead into halftime. Lynch and Young each scored during that run.

In the fourth, Seider gave the Tigers an insurance goal and an 8-3 lead with 2:30 left in the game. The Dragons beat Hoy one more time to cut the Tigers’ lead in half, but ultimately ran out of time and fell 8-4.

Woodall won 14 of 16 draws on the afternoon, while Hoy made seven saves.