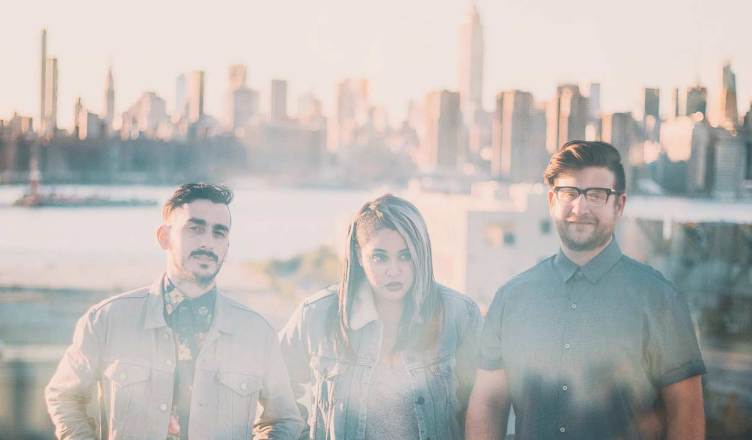 To be a band in today’s world can be difficult work – writing unique lyrics that connect to most people, creating a sound that is new yet current, and branding yourself in a way that catches attention despite the enormous amount of competition that exists. Imagine doing all of these things successfully, while rarely ever being in the same place as your bandmates. For Exnations, a musical trio that creates music across state lines, this is a reality worth living.

“It’s a unique experience for sure,” said Dan Ciarrocchi, Exnations’ guitarist and a Towson alum. “We still do the same work as any other band does, it’s just different how we go about it.”

Ciarrocchi and his bandmates Taylor Hughes (Exnations’ drummer) and Sal Mastrocola (Exnations’ vocalist and guitarist) demonstrated their ease at making things work despite the physical separation that was clearly apparent as I spoke to them each via telephone. Hughes described our interaction in one simple word that she later used to label her band’s unique creative process: comfortable.

She explained how the band uses the program Dropbox to share files with each other, their computers linking them together. Each member collaborates on a song before sending it to their producer, making sure to continuously communicate until they accomplish exactly what they were looking for out of a song.

They all agreed that although the process seems daunting, it adds value to their music.

“We work harder when we’re actually in the room together,” Hughes added. “I feel like a lot of bands take it for granted to live together. The distance makes us work a lot harder.”

Mastrocola expressed how he feels their work across states presents a challenge, but also a solution that each member did not get from their previous band experiences.

“It’s difficult because you can’t really feel it out in a live setting all the time, but our situation still definitely adds value to our music,” Mastrocola said. “I think collaboration is a really valuable tool. It can kind of bog things down in certain instances, like traditional band settings where you’re constantly working with one another. When I send a song off to Taylor or Dan, there’s no forced timeline or pressure, which gives each of us time to make thoughtful decisions.”

The story of how Exnations came to be was just as one-of-a-kind as their routine. The members collaboratively put together their experiences to tell me how they started working together.

Ciarrocchi cited his sister as his main source of inspiration to become a musician.

“My sister was really talented; she had a really great voice,” Ciarrocchi said. “I think my love for music probably started there, innately. As I got older, I just really got into punk rock and learning how to play the guitar.”

Teaching himself how to play in highschool, the guitarist began his band experiences in his teenage years.

“I did the whole start a band in my garage thing, as cliché as it is,” Ciarrocchi said. “That’s what I did and it just went from there.”

Ciarrocchi initially attended college at Loyola University in Maryland, where he met Mastrocola, who now lives in Brooklyn, New York. Both followed their own paths musically, making their marks with different groups in the East Coast area.

Hughes, on the other hand, created Exnations prior to working with her current bandmates.

“Exnations formed two years ago with completely different people, and with a completely different identity,” Hughes said. “I started it as a studio project, but over time, the chemistry amongst the original bandmates dwindled down. I reached out to Dan spring of last year.”

“We just got to talking about what we love about music and we just clicked,” Ciarrocchi said. “From there, that’s when I reached out to Sal. Logistics are kind of crazy. The band is in two different states [New York and Maryland]. We’ve been making it work.”

Hughes describes the synth-pop band’s music as “upbeat without lacking depth; a ‘dance while you cry’ type of band.”

As the lyricist and vocalist for the band, Mastrocola spoke on how important the lyrics can be for Exnations’ songs.

“The lyrics are always the hardest yet most satisfying thing for me to write,” Mastrocola said.

“I would say the lyrics are personal. I’m trying to explore more storytelling. We want our music to be socially-outward-looking; to tell the stories of other sources than just our own.”

The band hopes to continue on their musical journey for as long as possible.

“I think ultimately, I would just love to be continuing to make music we all feel passionate about,” Mastrocola said.  “I hope in five years we have a lot of people listening.”

Exnations released their single “Never About the Money” in August, and the group is set to perform at Baltimore’s Ottobar venue on Nov. 30, along with the bands Pocketbells, SMANTX and Us and Us Only.