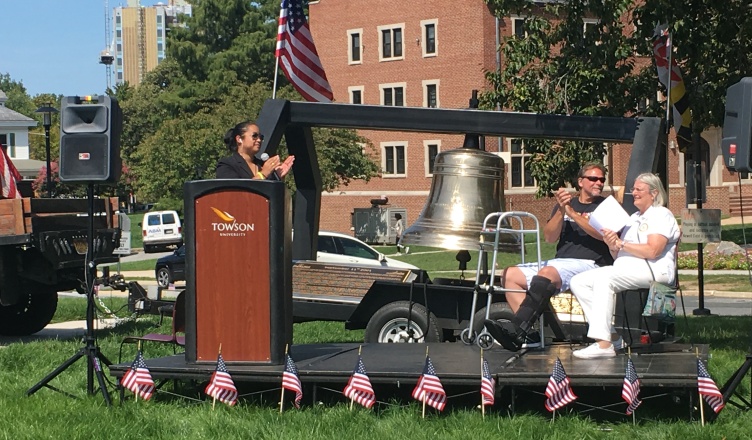 Towson University remembered and honored those who lost their lives in the 9/11 terror attacks, and in the wars that followed in Afghanistan and Iraq.

Community members gathered at noon on Newell Field on Sept. 11 to pay tribute during a ceremony planned by Benz Armstrong, the director of military and veterans services at Towson.

The event featured Maryland’s 9/11 Rolling Memorial, which was established by Chuck Ritz, co-founder of The Hope and Peace Foundation.

After University President Kim Schatzel and Armstrong greeted the audience, Tracy Miller, an advisor for veterans and ROTC students, read the names of Maryland residents lost. After each name was read, the bell was tolled by Armstrong.

“This is Maryland’s 9/11 Rolling Memorial,” Ritz said. “We unveiled it last year on the 15th anniversary. It’s the only rolling memorial in the state dedicated to the 69 Marylanders killed on 9/11 and also the 141 others last year, including Tracy’s son, Nick, who made the ultimate sacrifice on the war on terror.”

“Since we unveiled it four months ago, we are already adding four more names to it, Ritz said. “So there is a total of 145 Marylanders who made the ultimate sacrifice on the war on terror since then.”

The memorial features a 99-year-old bell which was cast in Baltimore and was carved with the names of the total 214 Maryland victims of the attacks and the wars that followed, including three Towson University alumni; Honor Elizabeth Wainio, Major Robert Marchanti, and Sergeant Major Wardell Turner.

Wainio was a mass communication major at Towson and was killed on Flight 93 during the attacks.

Marchanti and Turner were both killed in action.

Marchanti was a physical education major who taught for 17 years before he was deployed to Afghanistan in 2012 with the Maryland National Guard.

The Major Robert Marchanti Endowed Scholarship was created in his honor to help deserving student-athletes.

Turner attended Towson University on a football scholarship and graduated with a degree in management. He was killed in Afghanistan.

The Wardell Turner Scholarship is awarded annually to a Towson University defensive back who is in good academic standing and exemplifies the qualities that Turner embodied.

The ceremony also featured motorcyclists who rode to campus, following the rolling memorial to remember those who died.

Elementary education major Victoria Ziolkowski hopes that people will always remember 9/11 and the events that followed.

“I feel like it brings us together and helps us to remember an event that should never be forgotten,” Ziolkowski said.

Freshman Megan Granitzski said it is important  to remember and honor the victims of the 9/11 attacks.

“I actually came to this because I lost my third cousin in the South Tower, so I just figured I would honor him,” Granitzski said. “I never really got the opportunity to meet him obviously because I’m 18 and I was two [when the terror attack occurred]. Plus my Dad is a state trooper in New Jersey and he was actually there the night of because he works with Homeland Security. I’m definitely very happy that [Towson did something to commemorate 9/11] because I feel like as time goes on more people are doing less with it, and I think it’s very important to recognize it.”