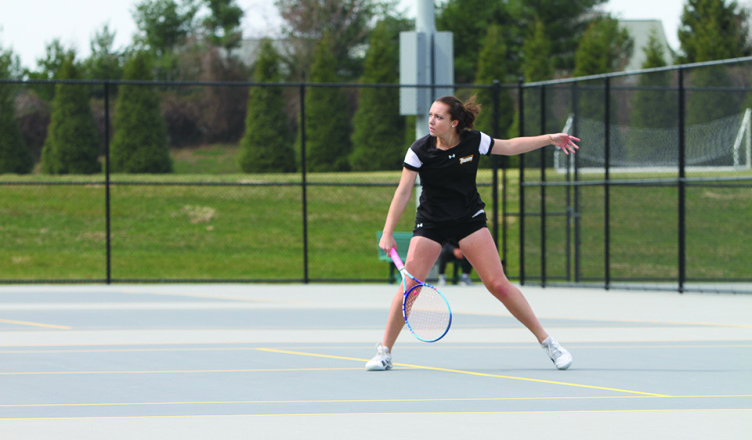 Towson put up a respectable performance at the Navy Blue & Gold Invitational tournament this weekend at the Brigade Sports Complex in Annapolis, Maryland.

“Through the entire weekend, we put ourselves in so many positions to be successful and didn’t do as well under pressure,” Head Coach Jamie Peterson said.

In the A singles flight, Nicole Shakhnazarova fell in her opening round match to UConn’s Yelyzaveta Pletnyeva 6-3, 6-2. She won her consolation quarterfinal match against Morgan State’s Danielle Thompson 8-6, but lost to Rutgers’ Maya Jacobs 9-8(3) in the consolation semifinals.

Also in the A singles flight, Lucy Williams lost a close opening round match to Rutgers’ Mingxiu Du 6-7(7), 6-0, 11-9. In the consolation singles quarterfinal, she was beaten by George Washington’s Maria DeCamps, 8-2.

In the C singles flight, Barbora Vasilkova fell in her opening round match to Rutgers’ Isabelle DaSilva 6-3, 6-1, and lost in the consolation quarterfinals to George Washington’s Victoria Kogan 9-7.

Also in the C singles flight, Renate van Oorschodt was defeated in her first-round match by Navy’s Miranda Deng 1-6, 6-2, 10-3. She received a bye into the consolation singles semifinals but lost to Binghamton’s Olga Ostrovetsky 8-6.

In the E singles flight, Claire Bedi received a bye into the quarterfinals, but was edged by Hannah Cianciola 4-6,6-4, 10-6. She made the final of the consolation backdraw, topping Binghamton’s Emily Kong 8-1 and George Mason’s Nicole Haigwood 8-4 before ultimately losing to Navy’s Meghan O’Malley 8-3.

Also in the E singles flight, Jane Shusterman received a bye into the quarterfinals but was defeated by George Mason’s Kayleigh Hahn 4-6, 6-2, 10-8. She won her consolation quarterfinal match against Morgan State’s Oriane Yeheounou 8-4, before falling to O’Malley 9-7 in the semifinal round.

In the F singles flight, Theodora Francu beat Binghamton’s Maria Haykal 6-2, 6-2 in the first round before losing to Navy’s Danika Kahatapitiya 6-2, 6-1.

“There were six or seven match points between numerous matches that we weren’t able to close out and ended up losing those matches,” Peterson said. “We lost a bunch of super tiebreakers and tiebreakers in the consolation eight-game pro sets.

In the A doubles flight, the team of Gomer and van Oorschodt fell in their opening round match to Rutgers’ Du and Jacqueline Cochrane 6-4. They won their only match in the consolation backdraw, defeating Binghamton’s Eisenberg and Ashley Granieri 6-2.

Also in the A doubles flight, the team of Williams and Shusterman dropped their first-round match against Navy’s Emily Louie-Meadors and Claudia Mackenzie 6-1. They also won their only consolation doubles match, beating Morgan State’s Thompson and Asmara Faluke 7-5.

In the B doubles flight, the team of Gloninger and Martinez lost their opening round match to Navy’s Amanda Cyr and Deng 6-4. They won their lone consolation match against Rutgers’ Lee and Levy 7-5.

Also in the B doubles flight, the team of Shakhnazarova and Vasilkova advanced all the way to the semifinals, defeating Binghamton’s Kong and Alli Roma 6-1 and George Mason’s Hahn and Haigwood 6-3 before falling to Navy’s Aimee Dervishian and Kahatapitiya 6-3.

In the C doubles flight, the team of Bedi and Francu beat Howard’s Christina Joynes and Sajela Harlow 6-3 in the quarterfinal round before losing in the semifinals to Navy’s Isabel Balsavage and Tina Li 6-2.

“I felt like we played and competed better than a few weeks ago from the beginning of the season, even though the end results may not show it,” Peterson said.

This was Towson’s last full team event for the fall season. Shakhnazarova and the doubles team of Gomer and van Oorschodt will compete at the USTA/ITA Atlantic Regional Championships hosted at Virginia Tech starting this Friday, Oct. 13.