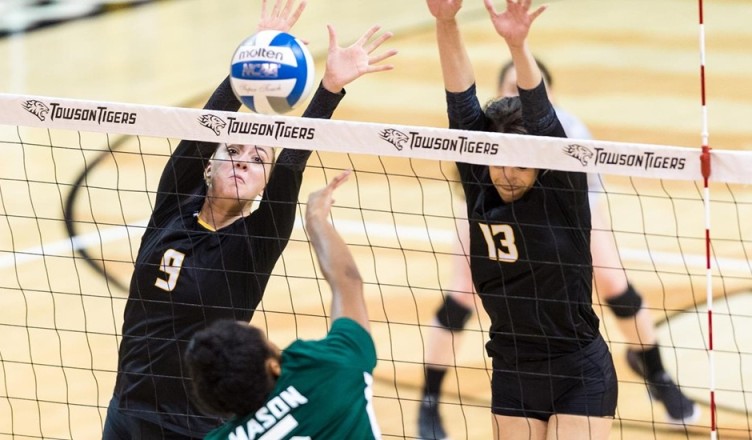 Towson closed out its regular season with a 3-0 (25-20, 25-23, 25-17) win over Colonial Athletic Association (CAA) foe Delaware at SECU Arena Sunday afternoon. Before the match, the team’s two seniors, Julymar Otero and Payton Windell, were honored on senior day.

Otero, who was two digs shy of another triple-double, led the way for the Tigers with 14 kills, 15 assists and eight digs. Junior Carola Biver had a double-double with 10 kills and 16 digs.

“I thought we played a bit sluggish,” Head Coach Don Metil said. “It was great to come away with a 3-0 win but we need to execute at a little higher level going into next week.”

A highlight of the match was the return of Windell, who the Tigers lost for the season due to injury. She hit the match’s first serve, and later re-entered to deliver a service ace to secure the win.

“Payton has worked really hard just to get back to the point where she can do a serve in a match situation,” Metil said. “It was a really special moment for all of us, not just her, and is something she can take with her for a really long time.”

Otero put in another strong performance as she recorded her CAA-leading sixth triple-double of the season with 15 kills, 27 assists and 14 digs. She still ranks second in the country in triple-doubles.

The Tigers (26-4) finished CAA play with 12 wins and four losses to lock up the No. 2 seed in the CAA championship tournament for their second time in three years. The tournament runs Nov. 16-18, and will be held at James Madison in Harrisonburg, Virginia.

Towson, who has a first round bye, will face the winner of No. 3 seeded James Madison and No. 6 seeded Elon.

“The difficulty for us is that we have to go to the tournament not knowing who we are going to play,” Metil said. “We are going to really take the next two or three days just to focus on things we need to do better on our side of the net and we will be prepared for all the teams we could possibly face.”