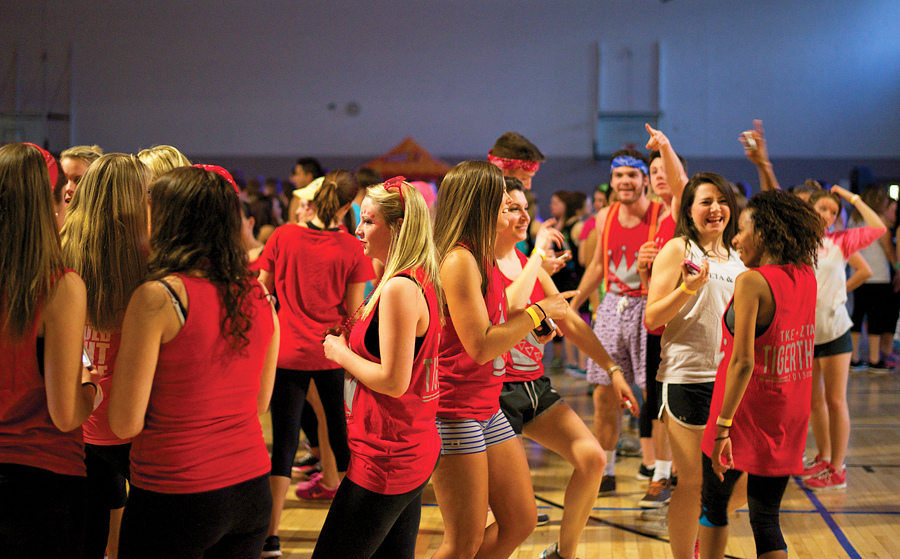 Instead of working out at Burdick Hall on Friday afternoon, members of Towson’s Greek life rushed around preparing for the hundreds of students that would soon arrive in dance attire and a minimum donation of $40.

Towson University’s annual TigerTHON event began at 6 p.m. and ran until 6 a.m. the next morning. This 12-hour dance marathon raises money and awareness with Johns Hopkins’ Children’s Miracle Network, an organization that helps over 170 children’s hospitals throughout North America.

“We have singing groups performing, dancers performing, a sports themed hour, a rave themed hour … that’s at four in the morning … everyone starts to get tired so we start to pump everyone up to keep them going,” junior and director of media relations for TigerTHON Morgan Stritzinger said. “We encourage everyone to stay standing, we don’t want anyone to sit for the 12 hours, so it’s really hard.”

A DJ played popular, upbeat music all night, while OrderUp, the event’s number one sponsor, donated food to keep the dancers energized all night. Sororities and fraternities made signs and played games to earn spirit points, and all took part in the game Black Hole, where students paid to get trapped in a hole to encourage their friends to pay their way out.

“[Dance] is just super engaging and exciting and the music revs everyone up,” Stritzinger said. “We want to dance for those who can’t, dancing for kids that are in the hospital, dancing for kids who maybe couldn’t beat their disease.”