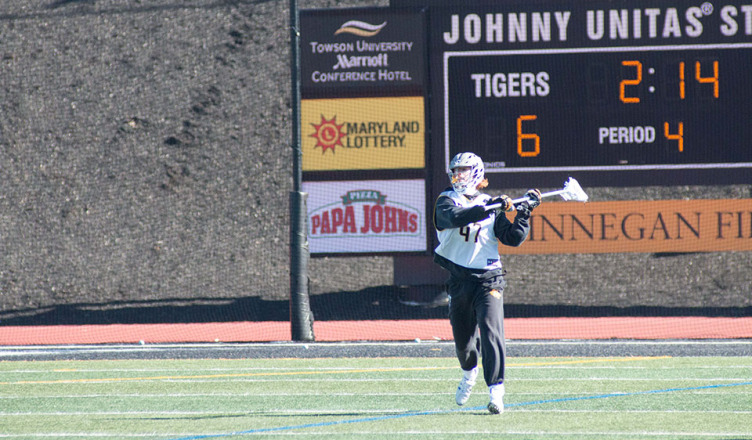 Head Coach Shawn Nadelen and the Tigers won their fourth straight season-opener Saturday with a 13-5 win over Mount Saint Mary’s, thanks in large part to sophomore Jon Mazza.

Mazza, who made his first collegiate start at attack after playing his rookie year predominantly as a midfielder, had a hat trick in both the first and second half, scoring a game-high six goals.

Despite Mazza’s performance, the Tigers started slow and the Mount managed to score the game’s opening goal when Ryan Lamon found twine off an assist from Jack Mangan.

Towson’s seniors stepped up, however, as attacker Ryan Drenner leveled the game up with a low drive while on his knees. Then, after another goal for Mount St. Mary’as, the Tiger’s leading scorer from last year, attacker Joe Seider, tied the game at two heading into the second.

The Tigers’ offensive attack exploded as they ripped off five straight goals in the second quarter.

Mazza recorded a hat trick in a six minute span, and Towson began to open up the Mount’s defense with sharp passing.

Chris DiPretoro scored his second goal for Mount St. Mary’s with just 12 seconds left to play in the first half. Towson managed to take a 7-3 lead into the break and opened the game up in the third quarter.

Towson’s new look defense, which featured four new starters including junior goalkeeper Josh Miller, held the Mount to just two goals in the second half and completely shut them out in the third.

Drenner opened the scoring in the second half with a weaving run that opened up a hard angle try which the senior converted while falling down.

“On offense, we had some new guys in new spots,” Nadelen said. “I thought they did a good job sharing the ball.”

Towson’s offensive display was capped off by goals from Seider and Mazza, who scored the first sock trick, or six goal game, for the Tigers on the road since 2013. Two late goals from the Mount served only as consolation as Towson came away with the 13-5 win.

Along with the attack, Nadelen was impressed with sophomore transfer Alex Woodall’s performance in the faceoff circle.

“Woodall had a very strong game which we were hoping for,” Nadelen said. “He’s come in and earned that starting spot and takes a lot of pride in that. You can see that in his effort today and he really takes pride in practice and wants to be the number one guy.”

Up next for Towson is another away matchup, this time at Georgetown Saturday at noon.

Towson’s home opener is scheduled for Wednesday, March 1, against the ninth-ranked Loyola Greyhounds.