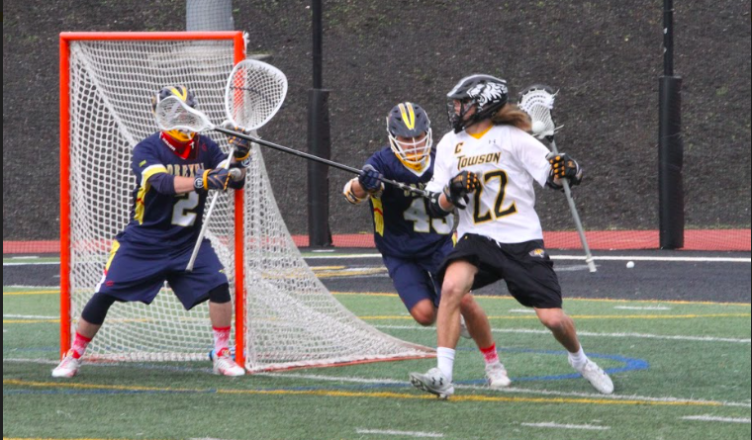 A 6-0 run in the first quarter, four goals from senior attackman Joe Seider and 12 saves from senior goalkeeper Matt Hoy propelled Towson into Championship Weekend with a 10-7 victory over No. 2 Syracuse Sunday at Delaware Stadium.

“I couldn’t have been more excited or more proud for our team and what they were able to accomplish today and throughout the season,” Head Coach Shawn Nadelen said. “Especially today, we started strong, started fast and did a good job in that first half and were able to withstand Syracuse’s effort to get back in that second half.”

The Tigers (12-4, 5-1 CAA) wasted little time before striking against the Orange (13-3, 4-0 ACC). Less than three minutes into the contest, sophomore midfielder Jon Mazza ripped a shot into the back of the net to give the Tigers a 1-0 lead. Mazza’s goal was the first of the 6-0 first quarter run for the Tigers.

Following Mazza’s goal, senior midfielder Mike Lynch took advantage of a man-up opportunity to give Towson a 2-0 lead. Lynch’s 20th goal of the season came on a helper from senior attackman Ryan Drenner, who finished the day with four assists.

Towson continued to take advantage of Syracuse’s mistakes late in the quarter. Seider scored three goals in the first, two of which came on man-up opportunities. Senior midfielder Matt Wylly also scored during the team’s run.

I think we just shot the ball well, I feel like everything was clicking for us in that first quarter and going into the second quarter,” Drenner said.  “As a group we kind of said we need to tale a level head approach to these next three quarters. We hadn’t won anything yet and a six-goal first quarter is not going to win a game. It’s the play for the next three.”

In the second quarter, the Orange struck twice to make it a four-goal game. However, the Tigers answered with two goals of their own to regain a six-goal lead. Lynch and Seider scored during that run and the Tigers went into the half with an 8-2 advantage.

For the second time on the afternoon, Towson regained a six-goal lead following a strike from Wylly. Wylly’s fourth goal of the season and unassisted tally gave the team a 9-3 lead going into the final 15 minutes of play.

In the fourth quarter, the Orange came out with a sense of urgency and scored the quarter’s first three goals to make it a 10-6 game. During the Orange run, Solomon scored twice and junior midfielder Brandon Bomberry also added a goal.

Following Syracuse’s early fourth quarter run, both defenses dug in and played stiff. The next goal didn’t come until late in the game when Solomon scored with 42 seconds left. Syracuse tried to rally following Solomon’s fourth goal of the game, but Towson held on to win and advance to Championship Weekend.

“It’s really exciting,” Drenner said. “I think the team is playing well at the right time of the year. I don’t think anybody on the team would say it’s a magical feeling because we expected to be here. We built on our success each year and right now I think we’re really confident going into next weekend.”

With today’s win, Towson advances to the 2017 NCAA semifinals where the team will play No. 3 Ohio State in Foxborough, Massachusetts. The game will take place Saturday May 27th, with the official start time still TBD.

More coverage on next weekend’s game can be found here at thetowerlight.com.