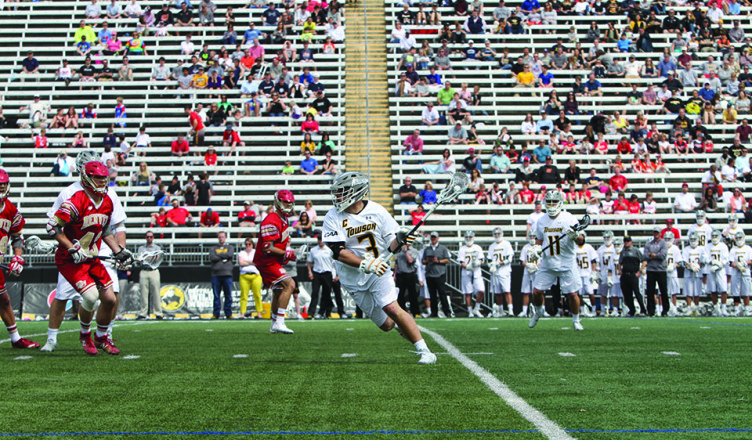 The Tigers opened their Colonial Athletic Association (CAA) schedule Saturday by overcoming a slow start to secure a 8-7 victory over Drexel in Philadelphia.

Towson started the game off slow in a first quarter that featured just one goal from each side.

Towson paid for its mistakes when Drexel scored with just a minute left in the first quarter on a quick transition goal from Luke Hurley.

“I don’t think it was such a slow start, we just had trouble capitalizing on our opportunities,” Head Coach Shawn Nadelen said. “We created a lot for our attackers we just couldn’t finish.”

The Dragons wasted no time in the second quarter taking the lead just 53 seconds in when Jacob O’Donnell fed an assist to Cole Shafer. Shafer’s goal would spark a solid second quarter performance from the Dragons.

Drexel scored three of the quarter’s four goals to take a 4-2 lead into the half. Robert Frazee and Shafer contributed the goals for the Dragons, who put seven shots on the cage.

The Tigers regrouped at halftime and came out firing in the second half. Senior attacker Joe Seider scored early when he received a pass from sophomore Jon Mazza.

Senior attacker Ryan Drenner, Towson’s leading scorer, tied the game 4-4 when he scored his 18th goal of the season at 12:36.

Later in the third, Drenner recorded a hat trick to tie the game 5-5. However, the Dragons took a 6-5 lead just before the end of the third quarter, when Frazee scored his second of the day.

In the fourth quarter, Drenner scored a career-high fourth goal to tie the game 6-6. Lynch then gave the Tigers their first lead since the opening two minutes of play when he put a shot past Dragons goalkeeper Joe Granito.

Towson’s lead didn’t last long when Manganiello scored his second goal for Drexel to tie the game 7-7. However, senior midfielder Tyler Young scored his third goal of the season, and it proved to be the game-winning score.

Up next for Towson is a matchup against CAA opponent University of Massachusetts Amherst, Saturday at noon at Johnny Unitas Stadium.