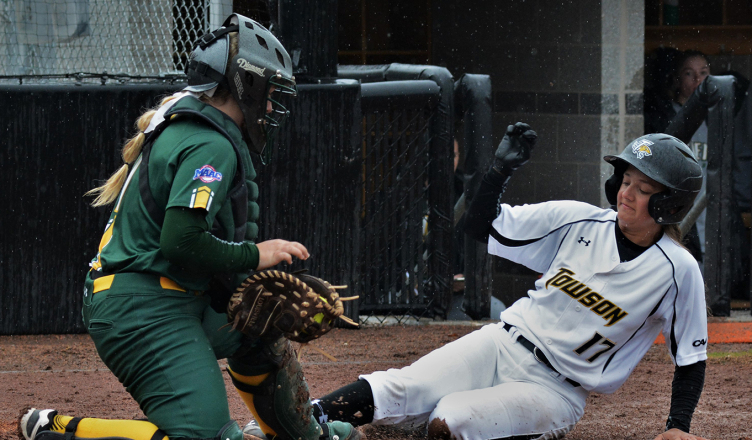 Miko became the first player in school history to record 50 doubles, and Scott set the single-season program record with 19 doubles in one season.

Towson turned four walks into a run, and took a 6-0 lead in the top of the second inning.

Senior Megan Dejter avoided a bases-loaded jam in the bottom half of the second to keep Drexel off the board.

Dejter has now pitched her 64th career game and improved her record to 14-3.

Drexel gained its only score of the day with one home run in the bottom of the fifth.

Towson scored three times and earned a 9-1 victory over Drexel to complete the three-game sweep.

In game two, Towson beat Drexel 11-9 thanks to strong performance by Scott at the plate.

Towson led the first three innings on a home run to center field by Miko, which gave the team a 5-0 lead.

In the bottom of the third, Drexel cut into Towson’s lead and tied the game. However, Towson regained the lead in the fifth inning to take an 8-7 lead.

In the bottom of the fifth, Scott slammed a home run to left field. Scott’s home run extended Towson’s lead to 10-7.

The Dragons earned a run the bottom of the fifth, but the Tigers held on for the win after
Scott doubled to center field to give the visiting team some insurance.

In game one of the double header, the Tigers topped the Dragons 9-2.

Towson took a 2-0 lead at the top of the second after junior Nicole Stockinger hit a home run to left field, scoring Edwards.

Pitching by Dejter kept Drexel off the board throughout the third inning, and in the top of the fourth, Towson extended its lead with a bases-loaded two-run single by sophomore Jessica Swistock.

The Tigers later jumped to a 7-0 lead after Scott hit a home run to center field, scoring Swistock and Minnatee.

Drexel made a dent in the scoreboard in the bottom of the sixth with a home run, and an unearned run on an error by Towson.

In the top of the seventh, the Tigers gained two runs. Sophomore Madison Wilson hit a home run, and senior catcher Shelby Stracher hit an RBI to give the Tigers a final score of 9-2.

Towson improved its home record to 6-1 after picking up a pair of wins in a mid-week doubleheader against George Mason Wednesday afternoon.

The Tigers defeated the Patriots 11-3 before taking an 8-7 victory later that day.

In game one of Wednesday’s doubleheader, the Tigers struck first in the first inning as Edwards hit a two-run bases-loaded single. Stracher followed with an RBI double, giving the the Tigers an early 5-0 lead.

Towson extended its lead in the bottom of the fourth after scoring three runs. The three-run inning gave the team a comfortable 8-0 advantage over George Mason.

The Patriots attempted to get back in the game with an unearned run in the top of the fifth, and two hits in the sixth.

However, Miko doubled to center field scoring Wilson and Scott. The hit helped secure the win for the Tigers.

In game two, Towson’s offense got off to a 5-0 head start in the second inning. Scott hit a two-run triple to right center, scoring senior pitcher Olivia Baltazar and Stracher.

The Patriots scored consistently throughout with five runs in the bottom of the sixth, tying the score 5-5.

In the top of the seventh, George Mason gained a 7-5 lead after Towson allowed a two-run two-out double.

The Tigers quickly responded as Miko hit a game-tying RBI double to score Edwards and Wilson.

Up next, Towson will face Morgan State to begin a five-game homestand. The first pitch of the doubleheader against Morgan is set for 3 p.m.