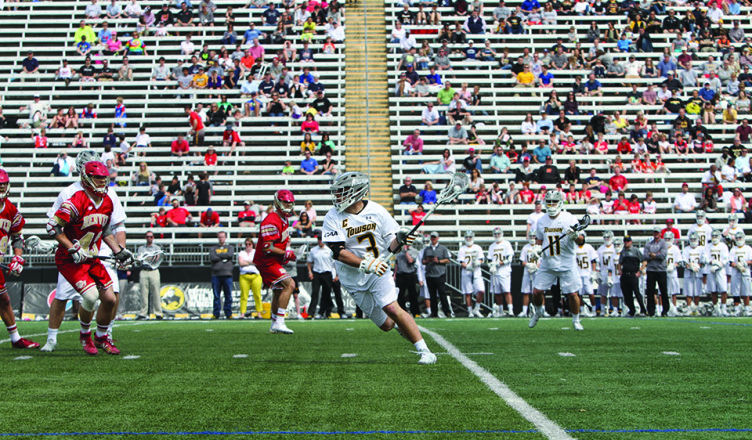 A strong second half performance and a four-goal game from senior attackman Joe Seider earned No. 12 Towson a 12-8 victory over No. 8 Penn State in the opening round of the 2017 NCAA Tournament and a spot in the quarterfinals.

The Tigers (11-4, 5-1 CAA) and Nittany Lions (12-4, 3-2 Big Ten) opened the first quarter by trading goals. The Nittany Lions scored first midway through the quarter, but senior attackman Ryan Drenner evened the score for the Tigers with 4:37 left to play.

It was the Nittany Lions who took a 4-3 lead into halftime when sophomore attackman Grant Ament buried a shot off a feed from freshman midfielder Nick McEvoy past Tigers’ senior goalkeeper Matt Hoy.

In the second half, Towson went on a 3-0 run to take a 6-4 lead over Penn State. Senior attackman Tyler Konen sparked the run for the team off an assist from Seider.

“We took care of the ball and scored more often in the second half,” Head Coach Shawn Nadelen said.

Redshirt sophomore attackman Dylan Kinnear followed Konen’s goal on a man-up opportunity and sophomore midfielder Alex Woodall capped off the Tigers’ run with his fifth goal of the season.

Following the Tigers’ run, the Nittany Lions scored three of the next four goals to tie the game 7-7 with 13:01 left in the fourth quarter.

Midway through the fourth quarter, senior midfielder Mike Lynch regained the lead for Towson on a man-up opportunity and sparked a 4-0 run for the team.

Lynch scored once more during the run along with Drenner and Seider to give Towson an 11-7 lead with two minutes left to play in the game.

Penn State and Towson each scored one more goal before the final horn, but Towson came out with a 12-8 win on the road.

Hoy earned his third victory of the 2017 postseason, he made nine saves on the afternoon.

Woodall won seven of 13 draws on the afternoon but went out injured in the third quarter and did not return to the game. Junior midfielder Connor Harryman took over for Woodall and won six of 11 draws.

Towson will have a week to prepare for its quarterfinals matchup against No. 2 Syracuse in a neutral-site matchup at Delaware Stadium.

If Towson comes out victorious on Sunday, it will be the team’s first win against Syracuse in the Division I era.

“Our confidence comes from preparationand the guys have done a good job of that this year,” Nadelen said. “We need another strong week of preparation for Sunday’s game.”