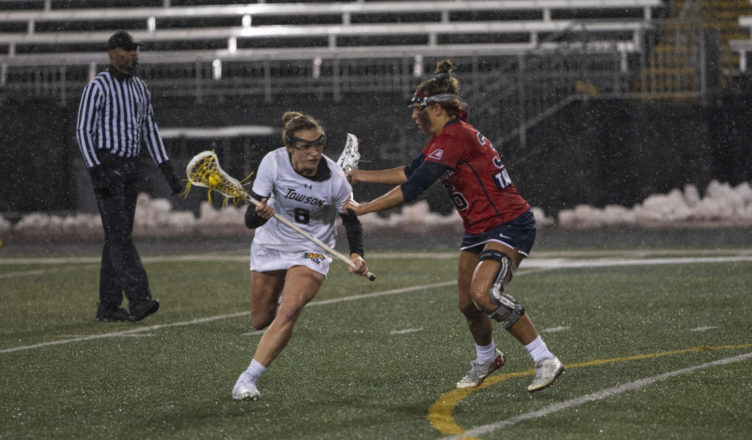 After losing the first three games of the regular season on the road, the Tigers would be home for the first time this season against the No. 10 Stony Brook Seawolves Friday afternoon at Johnny Unitas Stadium.

“We’re having a tough run right now,” said Head Coach Sonia LaMonica. “We’re gonna keep our heads up, but we’re gonna keep grinding. We have some bright spots in our game.”

“Rayna’s a great finisher,” LaMonica said. “She’s smart, and she did a good job of finding some opportunities inside.”

Towson’s offense was outmatched by Stony Brook through a 7-1 Seawolves run that carried for more than 20 minutes of game time, giving the visitors a 10-4 lead.

“Our settled sets for the most part were pretty sound,” LaMonica said. “We just got stung in some transition and some momentum runs there and those hurt.”

Following a three-goal run by the Tigers, Stony Brook scored the next four goals to put the game out of reach.

A late tally from junior midfielder Annie Sachs put the final score at 14-8.

Junior goalie Kylie Keating made 10 saves on the day.

“She really stepped up and continued to battle out on the field,” LaMonica said. “She really did a good job of coming out with some huge stops and she’s a good goalie.”

Next, Towson will host the Loyola Greyhounds at Johnny Unitas Stadium on Wednesday with game time set for 7 p.m. The Tigers will also be on the road against the Michigan Wolverines on Sunday at 1 p.m.

“We’ve gotta hang tough,” she said. “It’s little errors, it’s little ways we execute. We’ve gotta be better and that makes all the difference in the world. We have to step up and be prepared to bring that because it doesn’t get easier, but it’s also another great opportunity.”