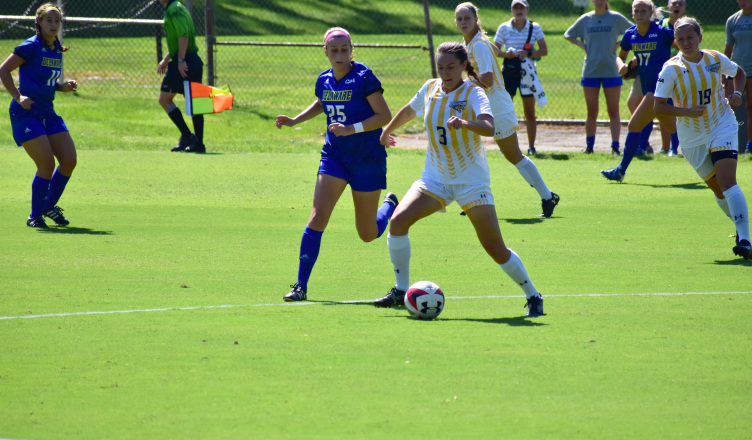 Towson’s hopes of qualifying for the Colonial Athletic Association (CAA) tournament were dashed Sunday as the team dropped its final game of the year 3-1 to William & Mary.

The loss comes just three days after the Tigers kept their tournament hopes alive with a 0-0 draw at Northeastern.

Needing a win and some help from other CAA matchups, the Tigers came out sluggish as the Tribe dominated early.

William & Mary midfielder Rachel Moore put her team on the board first in the opening 17 minutes after getting an assist from freshman midfielder Erin Dailey.

Towson failed to amount any threat in the first half as the team only managed two shots in the first 45 minutes.

Ten minutes after Moore’s goal, William & Mary doubled its lead with a goal from defender Elysse Branton off an assist from forward Sarah Segan.

“We hit a wall, we didn’t have enough energy to compete today,” Head Coach Greg Paynter said. “I think the travel and wear and tear of this season, especially the last couple of weeks, really affected us today. We played better and fought in the second half.”

Despite a third Tribe goal courtesy of Segan, the Tigers pushed to score throughout the final half of their season.

Towson finally broke through 75 minutes into the game when sophomore midfielder Grace Mondloch sent a cross over the top of the William & Mary defense that hit attacker Sam Lotti in stride. Lotti headed a shot into the back of the net to register the team’s lone goal.

“We had a lot of adversity this year,” Paynter said. “This team was always willing to get off the mat and go at it again.”

Sebolao set a program record for saves in a CAA game by making 18 against the Huskies to preserve the shutout and earn a point in the standings.

Senior midfielder Maddie Bové came closest to giving Towson a win against Northeastern in the 68th minute when a shot from the edge of the area beat the goalkeeper, but hit the post and went out of play.

This is the third year in a row that the Tigers will not make an appearance in the CAA tournament.