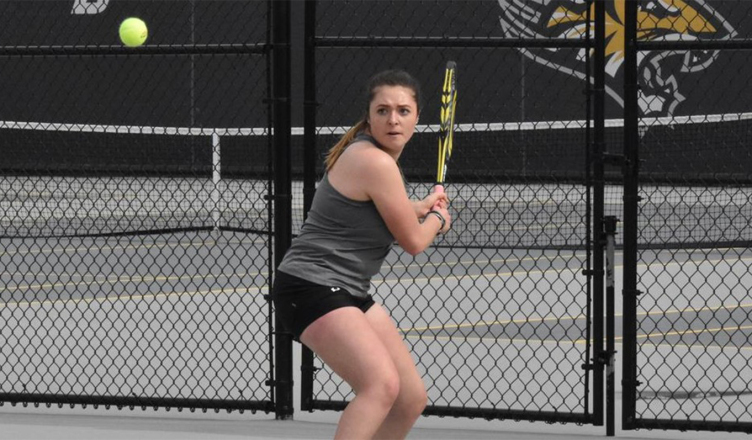 Those two matches concluded a five-match road stretch that began with a lopsided loss to Navy two weeks ago, followed by a pair of impressive wins over Georgetown and Saint Joseph’s last week.

“It’s the toughest stretch of the schedule right now,” Head Coach Jamie Peterson said. “But these aren’t excuses for us, it’s what the reality is.”

Sunday, the Tigers fell 5-2 to the Mountaineers at the Summit Tennis Academy in Morgantown, West Virginia.

West Virginia started off strong by taking the opening doubles point, a point that Towson has conceded in five of its seven matches so far this season. Christina Jordan and Sofia Duran defeated the No. 1 team of A.J. Gomer and Renate van Oorschodt 6-1, while Lyn Yuen Choo and Paula Goetz beat the No. 2 team of Lucy Williams and Jane Shusterman 6-2. Anne-Sophie Courteau and Giovanna Caputo narrowly topped the No. 3 team of Barbora Vasilkova and Lucy Gloninger 7-6 (5) to complete the doubles sweep.

The Mountaineers continued to apply pressure in the singles flights, winning the first three completed matches to clinch the dual match victory. Courteau defeated No. 2 Williams 6-3, 6-1, Choo beat No. 3 Gomer 6-1, 6-0, and Duran defeated No. 4 Shusterman 6-1, 6-1. The Mountaineers also won the final completed match, as Caputo outlasted No. 6 van Oorschodt 4-6, 6-2, 10-8.

Saturday, the Tigers struggled against the Dukes, falling 6-1 at Alpha Tennis and Fitness in Pittsburgh.

“We didn’t handle the adversity really well, and a lot of the bounces didn’t go our way,” Peterson said. “But Alexa [Martinez] was the epitome of what the rest of the team needed to be.”

The Tigers will face their first Colonial Athletic Association (CAA) conference opponent of the spring this Friday as they host James Madison at Coppermine Racquet and Fitness in Baltimore. Doubles play is set to begin at 6 p.m.