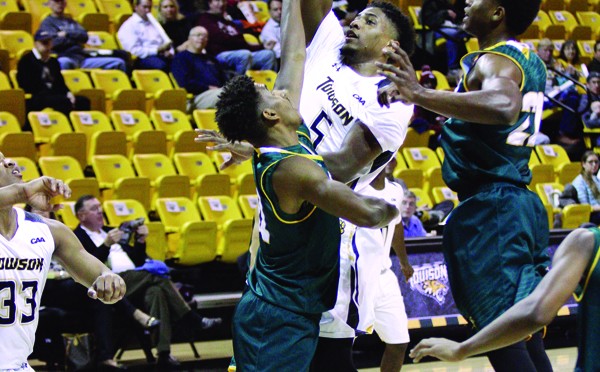 Towson’s 49 rebounds helped the team come away with an 83-61 win against Sacred Heart on Saturday afternoon.

“It was a good win and I’m really proud of the guys,” Head Coach Pat Skerry said. “I’m really pleased with the ball movement and I think we’re starting to see some of the things we’ve been talking about. We’ve got a lot of good players.”

The Tigers (6-3) had five players score in double figures and William Adala Moto lead the team with 16 points and 13 rebounds.

Sacred Heart (1-6) was held scoreless for the first four minutes of the game, but only trailed Towson 8-7 with 14 minutes left in the first half.

However, junior forward Walter Foster came off the bench and quickly scored six points, which brought the Tigers to a 33-17 lead.

Foster scored a season-high 15 points in the game.

“Towards the end, I started realizing it,” Foster said of his season-high performance. “It makes me feel confident going into conference play.”

The Tigers kept a consistent lead the rest of the first half and junior forward John Davis hit a buzzer-beating 3-pointer and extended the team’s lead to 42-25 at halftime.

Towson outrebounded Sacred Heart 25-15 in the first half, including seven rebounds from Moto.

Sacred Heart climbed back into the game by cutting the lead to 10 points five minutes into first half, but Towson pulled away with a 9-0 run in the middle of the second half.

Towson’s defense limited Sacred Heart’s leading scorer to 10 points, including just one point in the first half.

“We pride ourselves on defense,” Parker-Rivera said. “Coming into every game, we want to prevent teams from their strengths. It’s defense first, that’s what we preach, and that’s what we did today.”

“Our guys generally like each other, as we’re still growing and learning,” Skerry said. “I think they did a good job playing for each other and we certainly talked about playing for our seniors today. I thought the guys were locked in for an early game and did what they needed to do.”

The Tigers move on to a two-game road stretch, which starts off with an in-state matchup against the Loyola Greyhounds (1-7). Tip-off is Tuesday at 7:30 p.m.