Benz Armstrong had her last PTSD episode about five years ago during her sophomore year of college when a student in her class stabbed a sharpened pencil into a pair of birthday balloons.

“It made bursting noises and I literally dropped to the floor,” Armstrong said.

Armstrong, who is now the Director of the Military and Veteran’s Center at Towson University, said the sound of the balloons popping triggered her PTSD and brought her back mentally to her time serving in active duty.

The University Senate is debating whether to implement mandatory trigger warnings, which proponents say would better prepare people with PTSD to discuss or experience triggering material.

Student Government Association President James Mileo introduced a motion to the University Senate on Feb. 19. The proposal called on Towson to require professors to notify their students about sensitive material in their course syllabi, or at least 48 hours prior to when that material would be covered.

Opponents to the measure argue that requiring professors to use trigger warnings could hinder academic freedom. Proponents assert that the proposal does not prohibit professors from covering potentially triggering material, but only mandates that professors make students aware of such material so students may prepare themselves to experience or discuss it.

As a veteran and someone who experiences PTSD, Armstrong thinks trigger warnings should be mandatory at Towson.

Armstrong said professors’ use of trigger warnings would actively demonstrate that they want to create a safe and supportive learning environment, and would prompt students to be more confident in advocating for their needs.

“Our business is higher education, and we need to help educate students on a way to find their voices,” she said. “That is to see the support of our staff and faculty to be knowledgeable enough to create this safe environment and safe space while we do have them.”

Timothy Chandler, Provost and Executive Vice President for Academic Affairs, said that although he understands the spirit in which the trigger warning motion was proposed, the mandatory aspect causes concern about academic freedom and freedom of speech.

“I certainly don’t want to make it likely that traumatic experiences that have deeply influenced the student’s life are then reenacted in ways that are going to cause them further trauma,” Chandler said. “On the other hand, I feel that institutions of higher learning have an obligation to be uncomfortable…. If everything was comfortable and easy, we’re not making any progress.”

Towson University President Kim Schatzel said that if the University Senate passes the trigger warnings proposal, she will defer to Chandler on whether to sign or veto the legislation.

While the proposal does not prohibit professors from covering material, Chandler maintains that trigger warnings could have a chilling effect on necessary conversations.

Psychology professor Bethany Brand said she warns students about material in her classes that she thinks could potentially trigger someone, but that she disagrees with the idea of mandating trigger warnings.

Brand said there is certain material, like a documentary about women who were sexually abused as children that she shows in her class, that is more obviously graphic.

“Something that’s really unusually bloody or graphically violent, I actually think it’s a very good idea for professors to give students a warning about that,” she said.

But Brand said overall, professors can’t know everything that could trigger a student.

Brand, who is also a therapist, said one of her patients was triggered by the color red because her abusive mother used to wear red frequently.

“I think we should all treat each other conscientiously and with as much empathy as possible,” she said. “But there are times when people won’t know what will trigger somebody else…. I would hate to make professors feel like they had failed and they’re at fault if they didn’t realize that [material or a discussion] would be triggering to a student.”

Rather than Towson University instituting mandatory trigger warnings, Chandler said he would like to see students and professors work together to deal with difficult and uncomfortable conversations and situations.

Beyond trigger warnings, Brand said the University should educate students about how to deal with triggering situations by using two main techniques: grounding and containment.

Individuals who use grounding are advised to focus on things around them that they can see, touch, hear, smell and taste. Those sensory details help them regain their awareness of where they are rather than the traumatic event that the trigger caused them to re-experience, according to Brand.

“With PTSD, if a person [such as a survivor of assault] is badly triggered, they can start flipping back to where they were assaulted,” she said. “What you want to help them do is learn how to get grounded in present reality.”

According to Brand, containment is when a person uses imagery to metaphorically put away memories related to their trauma.

Brand uses the examples of somebody imagining themselves downloading their traumatic memories to a hard drive and turning off the computer, or putting the memories into a bank fault and locking it.

“It’s all imagery, but the idea is to help them gain a sense of control over what was uncontrollable,” she said.

Although Armstrong supports the trigger warnings mandate, she also believes that the conversation cannot stop there.

“[Faculty] need to be very well-versed on what PTSD is and what are some of the signs and symptoms of a trigger before it happens,” she said. “The last thing we want to do is have a student who is not aware [of their surroundings], because once PTSD kicks in, you really don’t become aware of what you’re doing.”

Armstrong said that survivors of trauma shouldn’t feel ashamed, but she acknowledged that students may feel embarrassed if they are triggered during class.

“Now the student is going to lose their confidence and they’re going to feel very embarrassed,” she said. “Sometimes when a student like that feels embarrassed … that could shed a very negative light and that student might not come back. We don’t want that.”

Brand said that especially when trauma is caused by one person against another, the survivor may feel dehumanized and ashamed. But Brand said that survivors should never feel ashamed of their trauma, and there is always hope that they will heal.

“[Shame is] one of the hardest parts to help them heal,” she said. “To realize that it’s not their fault, they’re not a horrible person, it’s not their body’s fault. These are things they need to learn in a very deep way so they can actually have healthy relationships.”

Armstrong said that if a student becomes triggered during class, the professor should excuse the student to the hallway, calm them down, and give them the option to take a break or be excused for the remainder of class.

She also said faculty should offer alternative lessons if a student knows they will be triggered by the assigned material.

While healing from trauma is a difficult and ongoing process, Brand emphasized that there is a light in the darkness.

“There’s hope that they can heal from that and eventually it won’t haunt them as badly as it does now,” Brand said. “They might find that in some ways, it has informed how they live in a good way. It doesn’t all have to be about loss and feeling bad about themselves…. I’ve seen amazing healing and growth in people who have been terribly mistreated. Help and healing is possible.” 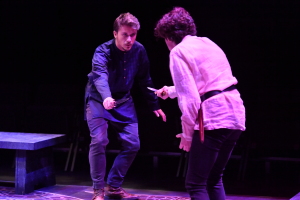