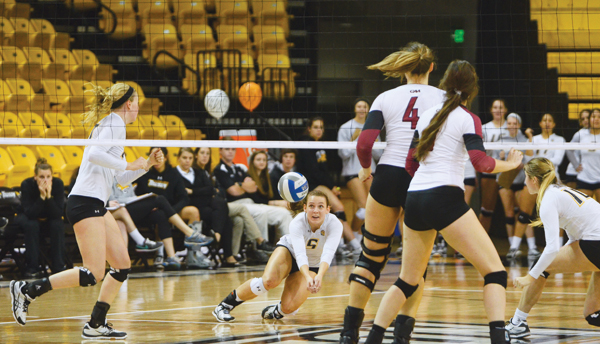 Towson’s season ended in the first round of the Colonial Athletic Association tournament after a 3-2 loss to James Madison on Friday in Charleston, South Carolina.

“I think it was the first time that we had to handle adversity all season and JMU was able to take advantage of that,” Head Coach Don Metil said.

The Tigers (27-5, 13-3 CAA) came into the match without senior outside hitter Haley Pa’akaula because of an injured foot. She was second in kills on the team coming into the match.

Towson took an early 4-1 lead in the first set after a kill from senior outside hitter Saitaua Iosia and three attack errors from James Madison (17-14, 8-8 CAA).

Towson attempted to change the tide in the second set and took a 3-2 lead off an attack error, but James Madison had 5-0 stretch that gave the team a 7-3 lead.

James Madison was in control until kills from sophomore middle blocker Lindsay Flaherty and senior opposite Victoria Willams a 5-1 run and cut the lead to 18-16. However, James Madison kept the lead and won the set 25-22.

The Tigers had to win the last three sets in order to move on in the tournament and controlled the third set. A 5-0 run, which included kills from Williams and sophomore middle blocker Candace Steadman, gave the team a 13-8 lead. Another 5-0 run later gave Towson a 20-11 lead. The team won the set 25-14 off an attack error.

Momentum helped the Tigers take an early 4-0 lead and the team never trailed in the fourth set. The Tigers were only threatened after a late 4-0 run from the Dukes that cut the lead to 24-22, but the Tigers won the set 25-22 off of a kill from Iosia.

Sophomore outside hitter Taylor Huewe, who filled in for Pa’akaula, finished the set with five kills.

Both teams faced elimination in the final set and James Madison took a quick 5-1 lead that Towson could not recover from. Towson cut the lead to 8-7, but James Madison went on 4-0 run right after and won the set 15-9.

Metil said although his team didn’t win a championship, he’s still proud of what it did this season.

“This was a nice year, as we set a lot of goals before the season and went on to exceed them,” Metil said. “We came into the season with the goal to finish at .500 and we made it to 27-5 and finished third in the conference. The team did a great job.” 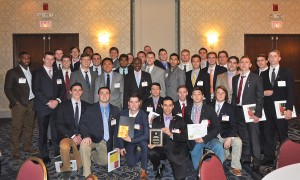