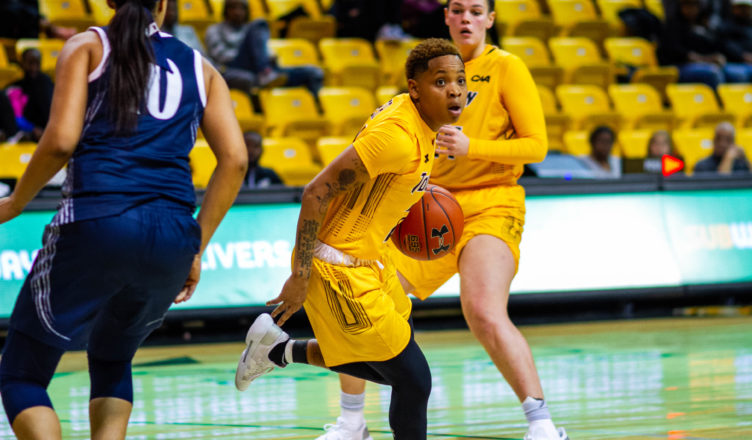 Towson is off to an inauspicious start to the season after dropping their record to 0-2 against San Diego State University. The Tigers (0-2, 0-0 CAA) continue to search for answers in finding out the preferred rotation and trying to put together a full 40-minute performance.

“It’s not quite what we expected but we’re going to bounce back and make sure that we stack up against the rest of the teams we play,” senior forward Nukiya Mayo said.

“That’s my goal for the season to be playing the way that I am,” Mayo said. “Because I know that will be what it takes to win another championship.”

Just like against Penn State, the Tigers started off really well on defense, holding the Aztecs to just 29% shooting from the field in the second quarter. The Tigers held a 39-31 advantage going into the half. However, that lead wouldn’t last with San Diego State seizing the momentum and shooting 66.67% in the third quarter.

“Some of our backup players I thought would be able to get in to step in is kind of a difference for them and a different level,” head coach Dianne Richardson said. “They didn’t perform to what I thought and so we had to keep our starters in a little longer.

We’re working on that, and working on rotations and who does well with whom and who can replace whom on the floor in crucial situations.”

In the third quarter the Tigers strung together two straight scoring possessions that created a 12-point lead off a Jeter 3-pointer. That 45-33 lead steadily evaporated after the Aztecs responded with an 11-0 run, cutting the deficit to a one-point game with six minutes left in the quarter.

“We just have to make sure that we hit them before they hit us after halftime,” Mayo said. “Not relax, not take a break.”

Not to be outdone, Murray fed Jeter for a mid-range jumper and brought the deficit back to 47-44, allowing the Tigers to exhale for just a moment. Murray converted on a long two to keep the Aztecs at bay 58-55, but the Aztec’s onslaught persisted. The Aztecs momentarily took the lead off a pair of free-throws from Adams moments later. The Tigers left the period clinging on to a one-point lead after junior center LaKaitlin Wright scored on a layup.

At that point the Aztec’s momentum was undeniable, and San Diego State rode it in a back-and-forth final quarter. Despite the final differential being eight points, the Tigers fought back and another layup by Wright did keep the deficit to 75-72 with a minute left on the clock. That was the last bucket the Tigers scored.

“It’s getting the rotations, getting the chemistry,” Richardson said. “Me as a head coach I gotta get those rotations together. I’m working on those things, (it’s) not something we could’ve worked on before we got into live games.”