The regular season came to an end for the Tigers in a sour way as the team dropped their two final games, falling to Colonial Athletic Association (CAA) foes Delaware and Drexel at home.

Saturday’s game against the Dragons (22-7, 14-4 CAA) featured a competitive first half, but the second half was a different story.

“We’ve been working on our shot selection and the game was a little whacky for us today and I think the girls felt it,” said Head Coach Diane Richardson in an interview with towsontigers.com.

“We gotta play through and hopefully we won’t let things get to us.”

Only one Tiger managed to reach double figures in scoring as junior forward Nukiya Mayo had a team-high 10 points.

The shooting woes were up and down the roster with Mayo and redshirt junior guard Q. Murray each shooting under 30 percent from the field. Towson shot a combined 22.9 percent in the second half.

Foul trouble was a big concern for the Tigers, as they doubled the amount of fouls committed by Drexel. As a result, the Dragons shot 29 free throws to four for Towson.

“We fought and fought and I’m not one that complains too much, but 29 free throws to four looks a little lopsided to me,” Richardson said.

Redshirt senior center Maia Lee could not be stopped on the boards, grabbing a career-high 17 rebounds.

Despite entering the fourth quarter with a one-point lead, Towson shot 20 percent form the field, as Delaware put the game away.

Although the season ended on a three-game losing streak, the Tigers’ 17 wins are the most in a season since 2009.

“I just wanted the kids to get better and be confident in their games. As a result of that, we got wins,” Richardson said.

As the Tigers concluded a memorable regular season, the focus shifts to postseason play with Towson locking up the No. 4 seed in the upcoming CAA tournament. This is the highest seed the Tigers have ever earned in the conference tournament.

The Tigers will get another shot at Delaware in the quarterfinals on Thursday, March 14 at 2:30 p.m. at the Bob Carpenter Center in Newark, Delaware. 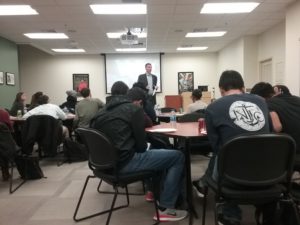