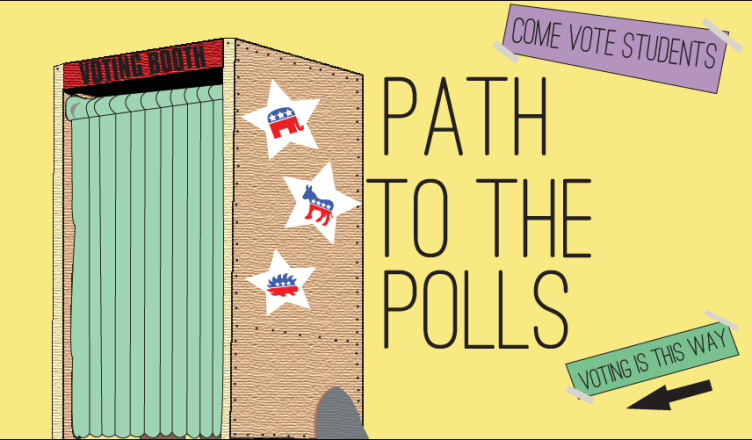 With the midterm elections coming up, Towson University offers numerous ways for students to get involved in the election process, including speakers, events, and voter registration.

According to the Campus Vote Project, young adults between the ages of 18 and 29 make up nearly 21 percent of the eligible voter population. Despite this, the National Study of Learning, Voting, and Engagement reported that, in the 2014 midterm election, of the 20,537 Towson students who were eligible to vote that year, only 15,704 students were registered to do so. The number of students who voted amounted to 4,265.

Sophie Bertrand, a Towson student and ambassador for the Vote Everywhere chapter of the Andrew Goodman Foundation, said that there are many reasons why she believes students do not vote and are not politically engaged.

Students and student organizations can also get involved in the voting process by volunteering, or setting up their own registration drives. To do so, there is an application form on the Voter Registration and TurboVote page at Towson’s website that students can fill out.

“We can support them in that work and if they have ideas or an event they want to put together they can also fill out that form,” Sierra said. “It’s very flexible so that we’re making it fit for their schedules. For individuals, they can also sign up.”

Founded in 1966, the Andrew Goodman Foundation is an organization meant to support youth leadership, voting accessibility, and social justice initiatives on campuses across the country by providing giving “mini-grants” to some institutions of higher education. The foundation also provides other financial assistance to students in support of their initiatives.

Jonathan Townes, also an ambassador for the Vote Everywhere chapter of the Andrew Goodman Foundation and a political science major, added that “a lot of people see the system as ineffective.”

“I’ve had conversations with people who’ve voted previously who just said that they’re not going to vote anymore because they just feel their voice isn’t being heard,” Townes said.

Some students would agree and feel that even if they did vote, at the end of the day it would not matter.

“When it comes to voting, I sometimes think it’s unnecessary because the way the votes are counting and just the consideration is not really your vote that’s being counted,” said pre-nursing major Averi Brunson. “You’re mixing up [your vote] with other peoples and you’re not really getting your voice heard or anything. So, I sometimes think it’s a waste of time because I don’t think you’re truly going to get who you want.”

Sociology and spanish double major Celine Yakoumatos said that while she’s registered to vote, for her it seems like a complicated process.

“I’ve gotten a lot of emails about it but I don’t really know what exactly they want me to do so I’m confused,” Yakoumatos said.

Bertrand and Townes both stressed the importance of being engaged in politics and voting despite student doubts in the process. For them, it’s more than standing in a line to push a few buttons and cast a ballot.

“I think it especially important for college students to become civically engaged, especially now,” Bertrand said. “Millennials are kind of the largest voting population, and we aren’t voting. So I think that the current trend of politics won’t change until we become more engaged in it, and so to kind of shape the country we need to be more engaged in it.”

“It’s really important, to like the tenth degree, that everyone votes in every election,” Townes said. “Because if you’re participating in a democracy and you’re not voting, then you’re forfeiting your right to be heard and have your opinions taken into account when policy is being created.”

To help students get engaged, Towson’s Department of Civic Engagement and Social Responsibility offers various ways to become engaged in the voting process. Luis Sierra, Assistant Director for Civic Engagement, noted that Towson University is partnered with a program called TurboVote. According to Sierra, TurboVote walks students through the process of registering to vote.

“TurboVote is the tool that we use to get people registered, but the important thing about TurboVote is that it’s not only about voter registration,” Sierra said. “You can change your address and also apply for an absentee ballot and TurboVote will guide you through the process.”

The program keeps track of all of the rules and regulations surrounding registration, absentee, and vote-by-mail ballots in all states to make keeping up with voting and registration easier. TurboVote will also send out text messages and email reminders about registration deadlines, upcoming elections, and voting locations.

The department is also holding Star Spangled September, which includes events such as a celebration for Constitution Day and National Voter Registration Day.

According to Sierra, Star Spangled September began because, as a federally funded institution, Towson is required to celebrate Constitution Day, and other key days for political engagement fell within the same month.

The month of events have included Thursday’s New York Times Talk and the Sept. 11 memorial. Some of the main events of the month are Constitution Day on Sept. 17, National Voter Registration Day on Sept. 25, and a campus conversation with ambassador Ira Shapiro Sept. 20.

Sierra  said the events “make sure students, faculty, staff, the entire community are starting off the semester ready, informed and engaged.”

For Sierra, it is important that everyone feels their voice is heard and matters.

“I recognize the fact that not everyone in the university is able to vote, and because of that, we want to make sure that even those who are unable to vote know that their voice still matters and knows that their voice can still be used,” said Sierra.

Townes said that students can also get involved and be politically engaged by opening up discussions on politics.

For Sierra, the message is that Towson is a community that votes.

“We are working to make it as easy as possible for everyone to be involved,” Sierra said. “Which is why we have tried our best to streamline everything into one message, a simple call to action… it begins with that simple message, and not only a message but a call to action that that is who we are, that is what we do.”