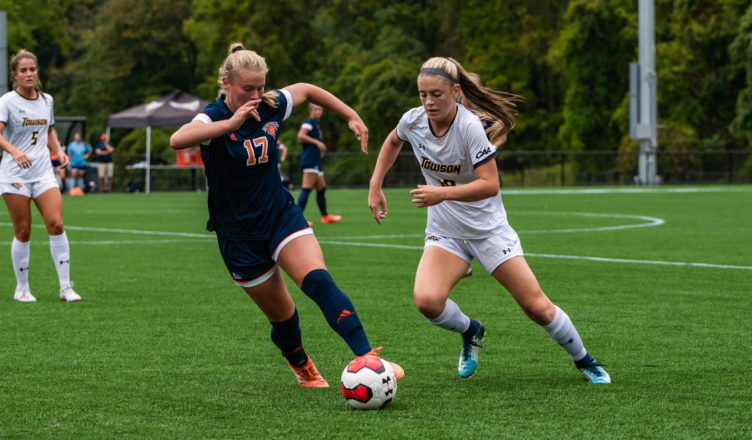 Sunday afternoon’s 1-0 defeat on the road against George Mason wasn’t the result Towson wanted to endure heading into their final non-conference game. Additionally, the thought that the Tigers (2-5-1) effort throughout the match in creating chances to tie and even win the game felt irrelevant with a goalless result.

“In a game like this, you can’t afford to miss chances,” said head coach Katherine Vettori.

Those opportunities for the Patriots (2-4-1) began in the 11th minute as senior Christiana Davey took a low show on goal that the George Mason goalie was able to save and cover.

Despite the Patriots ability to get off four shots and three corners within the game’s first 13 minutes, Towson’s freshman goalie Lindsey Pazdziorko wasn’t forced to make a save as all four shots missed the goal. Pazdziorko didn’t have to face her first shot on net until the 32nd minute.

Vettori said she was happy with Pazdziorko’s performance and could see her starting again this Thursday, noting her fantastic 16-save performance against George Washington on Thursday.

In the early stages of the second half, Pazdziorko’s clean sheet was ruined when George Mason took advantage on a counter attack, catching Towson off guard.

“It was because we were pushing numbers forward,” said Vettori, who attributed a Towson turnover that allowed the Patriots to gain possession before breaking the deadlock in the 51st minute.

In the 53rd minute, senior Nikki Logan took a shot that glided right of the post before Pazdiorko would come up with two more stops in the 60th and 69th minutes.

As the game went deeper and deeper into the closing stages, the play became increasingly physical. It wasn’t until the 85th minute when Towson would arguably get their best chance to tie up the score and send the game into extra time. Davey dribbled past multiple defenders and getting a shot off, which the George Mason goalkeeper would stop before a rebound found its way back to Davey who was denied again.

The Tigers will look to rebound Thursday, Sept. 19 as they return home for their final non-conference game of the season when they host the Richmond Spiders

Game time is set for 4 p.m. from the Tiger Soccer Complex.