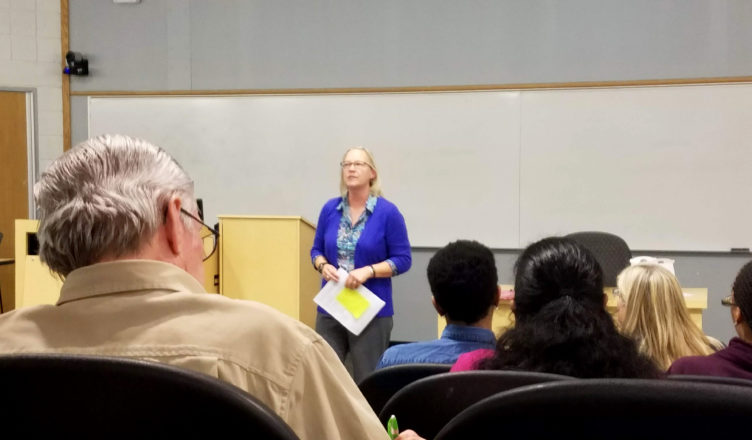 Towson University students and staff expressed concerns that the administration is not doing enough to support minority students during the Teach-In event April 29.

The Teach-In was organized by the University in response to the protesters that came to campus April 18 to “preach” to students while shouting anti-LGBTQ+ and anti-Muslim rhetoric. It was meant to act as a space for students and staff to discuss what had happened at the protest with members of administration.

TU junior Leah McLean said that she feels as though the administration has not always had a lot of transparent conversations with minority students, but that they are trying to build that relationship.

Some of the biggest concerns for students included representation of minority students amongst staff members and housing cost discrepancies for programs like inclusive housing, amongst other concerns.

Before beginning the discussion, Provost Melanie Perreault emphasized the importance of remaining during the Teach-in despite differing viewpoints that she was sure would come up.

“We’re all on the same team here, we are all team Towson, and certain knuckleheads with signs are not team Towson,” Perreault said. “We need to see ourselves as a collective that has disagreements as anyone would, but you can disagree without being disagreeable, and we are all a community of scholars, and so let’s talk about these issues.”

The discussion was framed by speakers John McTague, an associate professor of political science, and Cynthia Cooper, a professor of communication studies.

McTague said he wanted to help give some perspective on the events of the protest, and felt he may be able to since his scholarly background is in social movements, religion in politics and the LGBTQ civil rights movement.

“I’d like to speak a little bit, and have us think a little bit, about how we win the battle of ideas so that we build a world for ourselves and the future that has more love and tolerance and less of that hate we saw,” McTague said.

McTague said that in his research, one of the main reasons the LGBTQ+ community has made progress in the battle of ideas in the 50 years since Stonewall Riots is that they stood up for themselves.

He went on to say that one way to win the long game is to be visible and clear about when no will not be taken for an answer.

“I think that coming out metaphor and that visibility idea extends to fighting anti-semitism, fighting Islamophobia,” McTague said.

He also said that the group came to campus because Towson stands for everything they despise, like evidence based inquiry, diversity and inclusion.

“I think our task in thinking of the long game, as the privileged few in this world who get to enjoy the fruit of a college education, or get to teach as a way of making a living on a college campus, we need to make sure we take what we learn here, take the experience of interacting with people from different walks of life, take our ability to read, write, speak and articulate our views that we hone in our classes here, and realize our power,” McTague said. What you saw on April 18 was a backlash against our visibility, and so you need to fight back.”

For Cooper, it was important that she focus on the First Amendment and the government restrictions that go along with it.

“One of the things we know about the First Amendment is that it only applies to government restrictions,” Cooper said. “You might hear a lot of people say ‘this is a free country, I can say whatever I want.’ Well, you can, but with that responsibility also comes the responsibility to have people react in certain ways.”

Cooper pointed out that the government has interpreted the First Amendment to have preferred position for individuals.

“As individuals, we are given a preferred position when we are expressing ourselves,” Cooper said. “So restrictions have to be always tilted in favor of the individual expressive rights and the expression of individual ideas.”

She also discussed the difference between speech and conduct, and emphasized that restrictions must be content neutral.

“Speech is yelling, using placards, using signs, things like that,” Cooper said. “But you can’t throw a punch. That becomes conduct and that becomes actionable as you saw here the other day.”

Following Cooper’s speech, the floor was opened to students who guided the discussion away from the protest towards other issues they felt were prevalent on campus.

One issue that came up was the hiring and retention of diverse faculty on campus, including faculty with disabilities and members of the LGBTQ+ community.

Perreault responded to this concern by addressing her previous success in bringing together a more diverse faculty during her time in Buffalo.

“We need to pay faculty more money,” Perreault said. “We have to start there. The second thing we have to do is address the invisible workload for faculty of color.”

Perreualt said that she had noticed there was an added burden on faculty of color, largely focused around informal advising and writing letters of recommendation, among other things.

Another concern brought up by students included housing costs for things like the inclusive housing program.

Christina Olstad, Interim Assistant Vice President for Housing and Residence Life, was in the audience and said that this is something housing and residence life will look into going forward.

“It doesn’t make sense to upcharge when its an inclusive housing option to support our students,” Olstad said.

McLean acknowledged the teach-in was supposed to give students the opportunity to communicate with administration.

“When it seems that members of the administration are not necessarily supportive of all groups in the ways that they claim to be in reference with Towson’s diversity statement, that’s when things seem sort of out of whack,” McLean said.