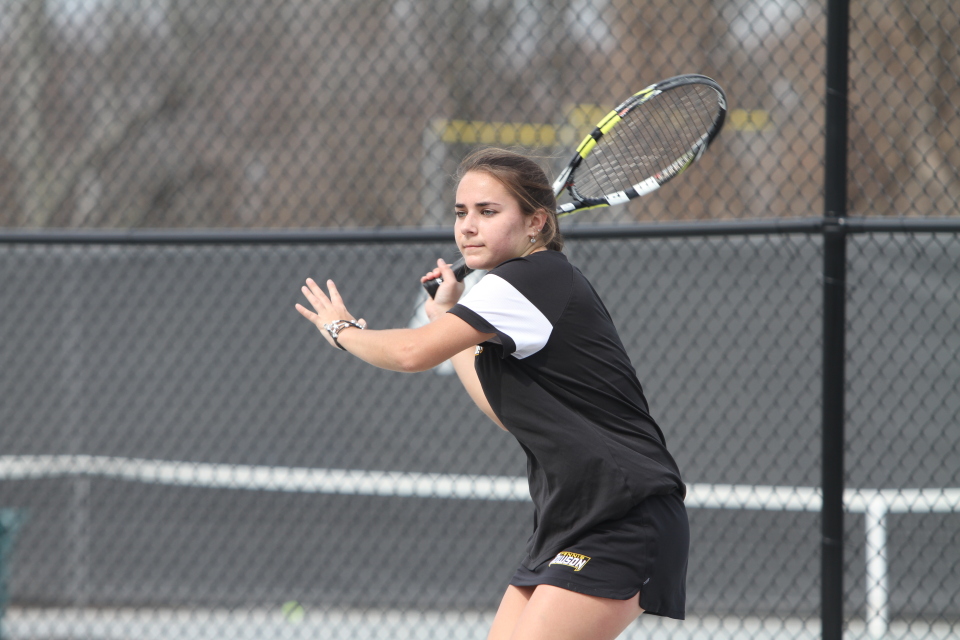 Towson earned strong wins in both singles and doubles this weekend at the ITA Atlantic Regional Championships hosted by Virginia Tech in Blacksburg, Virginia.

The Tigers were represented by three of the team’s five seniors, with Nicole Shakhnazarova in singles and the team of A.J. Gomer and Renate van Oorschodt in doubles.

“No Towson team has ever won the first round of singles and doubles [at this event before],” Head Coach Jamie Peterson said.

In the 64-player singles draw, Shakhnazarova faced Amanda Nava of St. Joseph’s in the opening round. The two faced off last month during the Tiger Fall Classic, with Shakhnazarova coming back to win that match 2-6, 6-4, 10-7 in a third set tiebreaker. This time, Shakhnazarova comfortably won, 6-2, 6-1.

“She came out very focused on her intent and what she was going to do and she did,” Peterson said. “She played very well.”

Shakhnazarova’s opponent in the round of 32 was No. 21 seed Teodora Radosavljevic of Virginia. She quickly found herself down 4-1 in the first set, but rallied to win five straight games to take an early lead in the match. She ultimately fell to Radosavljevic in three sets, 4-6, 6-2, 6-2.

“She competed really well and definitely gave herself a chance to win against a top player in the region,” Peterson said.

In the 48-team doubles draw, Gomer and van Oorschodt matched up against Emma Petersen and Anna Makarova of Colonial Athletic Association (CAA) rival James Madison. After a recent loss to a JMU doubles team at the Bedford Cup back in September, the Towson pair exacted revenge with an 8-4 first-round win.

“They played aggressively, which is the way they need to play,” Peterson said.

Goodman and Cheng ended up winning 8-2, but Gomer and van Oorschodt each earned a win in singles over players from Virginia and Marshall, respectively. The wins count for the players’ collegiate records.

“They got a nice win against a team we don’t have much success with,” Peterson said of the pair’s win against JMU.

This weekend marked the end of Towson’s fall 2017 campaign. The team will continue to train throughout the remainder of the fall and winter before kicking off their spring 2018 season against Mount St. Mary’s. The event will take place at Baltimore Fitness & Tennis in Pikesville, Maryland Saturday, Jan. 27.