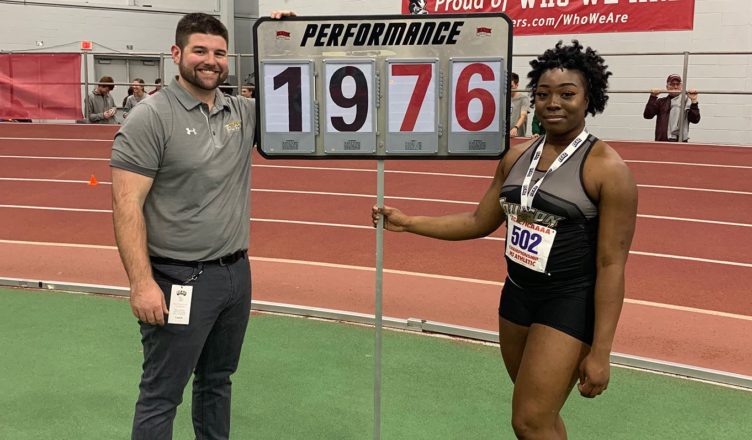 Towson had a school-best third place finish with 50 points in the Eastern College Athletic Conference Championships this past weekend at Boston University’s Track and Tennis Center.

Towson was the highest placed Colonial Athletic Association program at this year’s ECAC Championships. The team placed 12th at this event in each of the last two seasons.

“Love the energy that we had at the meet as a team,” said Head Coach Mike Jackson. “We were very supportive of one another, competitive and showed that they were one of the best.”

Junior Michella Obijiaku placed second with a 16.10 meter toss in the shot put while senior Phontavia Sawyer finished in fifth place, throwing 14.80 meters and giving Towson 12 points on day three of the meet.

Obijiaku won the weight throw on day two of the meet as she recorded the top-two tosses in this event’s championship. A toss of 19.76 meters won Obijiaku the event and her toss of 19.27 meters was the best when compared to other athletes in the event.

“Michella is an outstanding athlete,” Jackson said. “[She] has some great leadership qualities and we’re seeing that begin to blossom.”

Freshman Crystal Johnson timed 7.54 seconds in the 60 meter dash final and earned a bronze medal. Johnson was two hundredths of a second away from placing first.

“Crystal Johnson just is a special talent,” Jackson said. “God has blessed her with amazing ability and it’s my job to work on trying to cultivate her abilities, and we’ll be talking about her a lot over the next four years.”

Reid finished fifth in the 200-meter dash final timing 24.26 seconds while she placed second in the event’s preliminaries to qualify for the finals with a time of 24.16 seconds.

“She continues to get better and better every single year and she was supposed to win,” Jackson said. “She just ran like she was one of the best and she is and she knows that. She ran with attitude.”

“Our four by eight did a great job breaking a school record by over 13 seconds in the relay,” Jackson said. “They all ran special and this is the first time we’ve ever had a four by eight at ECACs and they showed that they belonged.”

Freshman Hayley Horvath placed first in the pole vault, earning a gold medal on day two. Horvath was the only athlete to have an attempt hit at a greater number than 3.95.

“This was Hayley’s first championship meet for us as a freshman, but she always brings her best when the pressure is on,” Jackson said. “She definitely made some noise and made a statement for herself and Towson.”

The indoor track and field season has come to an end, but there are already high hopes for next season.

“The next step for indoors next year is to get to indoor nationals,” Jackson said. “I think we’ll have a great chance to do that in the field events potentially in the dash.”

The outdoor track and field season will begin with two meets. The Doc Anderson Invitational will take place on March 15 and March 16 in Troy, Alabama while some athletes will compete on March 16 at the Maryland Invitational in College Park, Maryland.