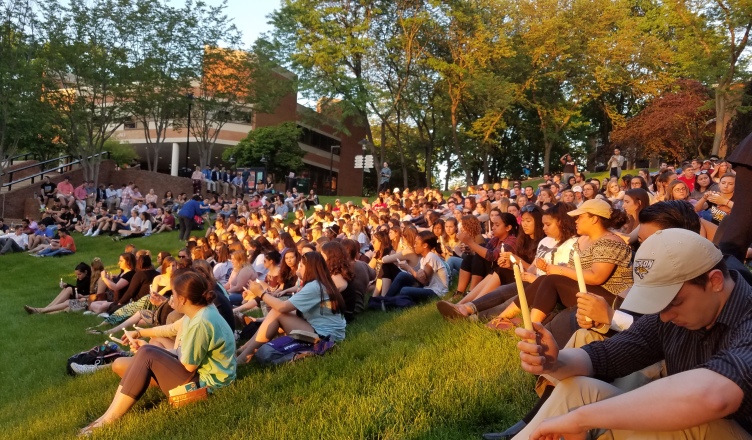 Knezevic passed away on May 7, according to Vice President for Student Affairs Deb Moriarty.

Friends and family gathered at Speakers Circle on May 16 for a candlelight vigil organized by KDR in remembrance of Knezevic, who was a brother of KDR and a freshman studying sociology and anthropology with a minor in electronic media and film.

“When we got initiated into Kappa Delta Rho as part of the founders class, it was extremely surreal to see someone I had called a friend for eight years turn into something more: a brother,” Lampos said.

At the beginning of the vigil, the Greek Life organization presidents entered together, each bearing a lit candle.

“The flame is to promote Greek unity and to represent the everlasting life that is fraternity and friendship,” Towson University Interfraternity Council President Cazmier Tymoch said.

Tymoch emphasized that the bonds of fraternity and sorority allow Greek Life brothers and sisters to support one another in times of both praise and sorrow.

“It is with much sadness that I must be here in front of you all, presenting this memorial service,” Tymoch said. “However, it must not go unnoticed that we – as a community of Greek-lettered organizations, a community of Towson students, and a community of respectful individuals – that we can embrace one another in a time when we may need it most.”

The Greek Life members provided candles and shared their flames with members of the audience. The audience members then passed their flame to those surrounding them until all candles were lit.

The audience shared in a moment of silence, prayers and words from Knezevic’s friends and fraternity brothers.

KDR brother Michael Schectman reminisced about the first night he met Knezevic years ago in Ocean City, Maryland. Schectman, Knezevic and six other friends packed into one car and made their way down to the boardwalk.

Schectman, who was in the passenger seat, remembers turning around to see Knezevic sandwiched between the backseat and the car door. He asked Knezevic how he was doing.

“Without skipping a beat, he said with that trademark smile ‘I’m fantastic, Michael. How are you doing?’” Schectman said. “I knew he wasn’t being sarcastic, and even at the peak of immobility, he still had that positive attitude. That action taught me that no matter how negative, dark or uncomfortable a situation is, as long as you’re around your friends and the people that you feel comfortable with, nothing can stop you and you should feel happy and never alone. Just like tonight.”

Schechtman said Knezevic “showed, without question, honor above all.”

Lampos remembered meeting Knezevic on the first day of sixth grade in math class when their teacher brought in a lock for a school locker to see how fast the students could solve it. Lampos said Knezevic solved it the fastest.

The pair’s friendship grew as Lampos said they travelled the world together on an 8th grade trip to the Mediterranean.

“We went on a lot of adventures on that trip, from seeing the Roman Colosseum to the Pantheon, the Acropolis and all the gelato you could eat,” Lampos said.

Lampos said he fondly remembers playing an immense amount of poker on that trip, whether it was in the hotel, outside or on the ferry to Greece.

Once they entered high school, the pair became even better friends. Lampos said Knezevic was always there to listen and offer advice.

“I know this is cliché to say, but Marko was a unique individual, he truly was,” Lampos said. “He was one of the most caring, selfless and funny people I could’ve ever known. He never lost his temper and always found the peaceful route out of any situation…I consider it an honor to have spent the better part of my teenage years with him, and to have called him my friend and my brother.”

Freshman Gabriel Donato said Knezevic was one of his best friends, having gone to school together since the sixth grade.

“Even though he was one of the youngest people in our friend groups, all of us kind of describe him as the ‘older brother friend,’” Donato said. “He’s probably one of the biggest risk takers, yet he’s always kind of babysitting everyone else when he’s not the one in trouble.”

Father Matt Buening, Catholic Campus Minister at the Newman Center urged the audience to lean on one another for support and speak out against anything that would isolate them, separate them or make them feel hopeless.

“There is always hope, my brothers and sisters, because no matter how dark it will get, the sun will rise,” he said.

A family friend created a GoFundMe fundraising campaign to assist the Knezevic family. As of this article’s publication, the campaign has raised over $14,500.

Moriarty said that after Towson University officials learned about Knezevic’s death on May 7, the University notified members of the residence hall where Knezevic lived and his fraternity to offer them resources, including a representative from the counseling center who was made available to speak with students in the residence halls.

According to Knezevic’s father, Knezevic’s cause of death was cardiac arrest.

“It’s just heartbreaking for so many people when we unexpectedly lose a member of the community, and we know it sends shockwaves across the campus, but more specifically to friends of the student,” Moriarty said. “So, we just want to make sure students know we’re here to offer them support when they need it.”