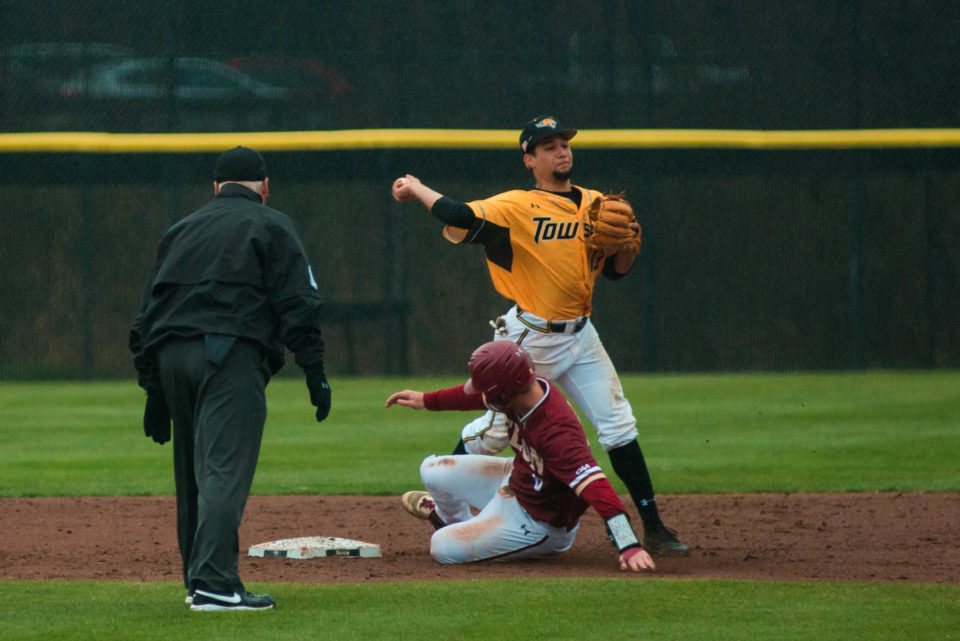 In a pivotal weekend, Towson earned two conference wins over the rival Delaware Blue Hens, moving them into the top six on the Colonial Athletic Association (CAA) standings.

“It’s fantastic,” said Head Coach Matt Tyner. “‘I look at it from the short time I’ve been here, we have always had the role of the hunter. We’re always on the bottom, looking up, and now those roles are starting to change.”

Making his first Sunday start of the season, junior pitcher Connor Coyle was feeling it early on, not allowing a hit through the first three innings, including one walk and two strikeouts. The Blue Hens (14-25, 6-9 CAA) would get to Coyle in the fourth inning with a run and Coyle left the game after allowing the first two batters on in the sixth inning.

“I told him you’re made for this, that’s why we recruited you,” Tyner said. “He’s very capable of being a weekend guy for us. Connor to take over that role and he did a great job for us and got five innings.”

The bullpen did not fare well for the Tigers (10-29, 5-7 CAA) as Delaware scored six runs in the sixth inning to take a commanding 7-2 lead.

Towson would get a run back on a sacrifice fly by senior infielder Zach Piazza, but it would not be enough as the Blue Hens took the series finale, 10-3.

Saturday’s doubleheader ended with the Tigers getting offensive production up and down the lineup as all nine batters reached base for Towson. Redshirt sophomore infielder Dirk Masters drove in three runs in the game, including two in a six-run second inning.

“All we asked [Masters] was to stay athletic and drive the baseball all over the field, and you’ll get rewarded,” Tyner said. “If he stays within himself, he’ll give us the production we need at the No. 2 spot.”

Senior catcher Trey Martinez also contributed three RBIs, including his second home run of the season, which he hit in the eighth inning as the Tigers extended their lead to 8-4.

Heading into the ninth inning, Towson led 10-4, but the Blue Hens mounted a furious comeback effort. Delaware had brought in one run and loaded the bases before the Tigers turned to redshirt sophomore pitcher Kody Reeser to shut the door.

“Kody did an admirable job,” Tyner said. “He’s still not as sharp as we want him to be, so to get him battle-tested, I’m hoping he grew from it.”

Reeser would allow three more runs to score as the Blue Hens had the go-ahead run at the plate with two outs. Reeser would not give in as he forced a groundout to end the game and give Towson the doubleheader sweep, 10-8.

“To win the double dip, that’s really unheard of in this league and in Division-1 baseball,” Tyner said.

Friday’s game was moved to early Saturday afternoon after inclement weather postponed the original game time. The series opener was a pitcher’s duel as both starters pitched shutout baseball through the first five innings.

Delaware struck first with one run in the sixth inning. The Tigers would answer in the seventh when Martinez knocked a single into right field to score senior infielder Richard Miller.

With the score tied, Towson went to the bullpen and brought out sophomore pitcher Jake Pecilunas. The pressure-filled situation did not faze Pecilunas as he pitched three hitless innings.

“He’s been the shining light out of that bullpen most recently,” Tyner said. “Very seldom, do you have that one arm that goes wire-to-wire out of the pen but he’s been there for us.”

As the game entered extra innings, still tied at one, the Tigers were feeling a grove after leaving two runners on base in each of the previous three innings.

In the tenth inning, Towson did not wait to seize the opportunity when redshirt junior outfielder Tom Flacco drew a leadoff walk. Flacco would steal second and then advance to third after the Blue Hens intentionally walked Miller and Martinez.

We had to win it right then. We could not go any further with our bullpen, couldn’t burn another arm in that game,” Tyner said. “When [Flacco] came to third, I said ‘let’s do it right here.’”

With freshman outfielder Isaiah Winikur at the plate, Delaware junior pitcher Derek Wakeley threw a pitch in the dirt that allowed Flacco to steal home and win the game, 2-1.

Having taken two wins in the series, the Tigers move into a three-way tie for fourth place in the CAA standings, along with Hofstra and UNC Wilmington. The top six teams make it to the CAA Tournament in Harrisonburg, Virginia in late May.

“Stay true to the process, understand where we’re at and embrace it,” Tyner said. “We’re not in charge of what UNCW, Hofstra, JMU or Delaware do. What we have influence on is trying to beat a darn good William & Mary team.”

Towson will continue their strong play with a midweek date against UMBC on Tuesday, April 23 at 3 p.m. at John B. Schuerholz Park. After that, the Tigers will host the William & Mary Tribe for a weekend series that beings on Friday, April 26 at 3 p.m.