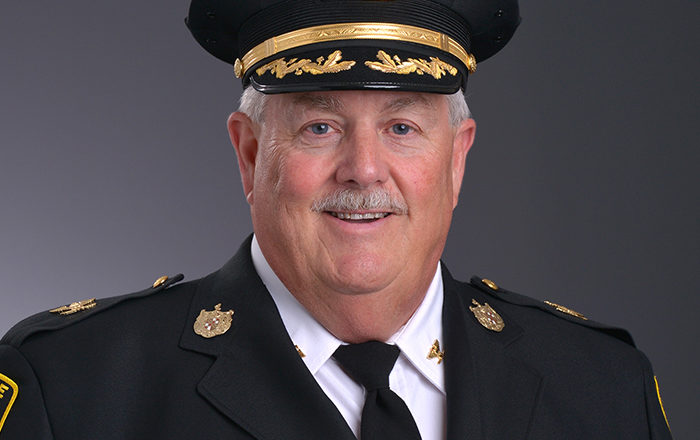 Towson University recently announced that it has named the new Chief of Police following a national search to fill the role of the campus’ public safety official after the retirement of TU’s last chief.

Bernard Gerst, Towson’s previous chief of police, retired in July of 2018 after serving the university for 17 years.

Col. Charles “Joe” Herring, who had been acting as the interim chief, will be taking over the role as chief.

“I was, obviously, pleasantly surprised and excited to have the role,” Herring said. “I’ve been here for 17 years, and I enjoy working with the community and look forward to continuing in that role.”

Herring, who has been a member of the police force for 42 years, is in charge of overseeing day-to-day operations of the different departments under him.

“I have two bureau commanders, which are captains, and a division commander who’s a lieutenant,” Herring said. “Then, also under the office of public safety I have environmental health and safety which has its own director and staff.”

Herring will also oversee the Access Control and Emergency Preparedness departments in his role as chief.

“The men and women here that make up the police department are 100 percent dedicated to this campus,” Herring said. “I watch them everyday, and I watch them sacrifice and put the campus in front of their personal needs.”

As the interim chief, Herring worked alongside campus leadership as a member of the President’s Council, and will continue to do so as the Chief of Towson’s Police Department.

“When I arrived, I added the TU Police Chief to the President’s Council, seeing a need for this important public safety perspective in conversations and decision making,” Towson University President Kim Schatzel said in a statement. “And as chief, Col. Herring will continue to serve in this capacity.”

Before his time with the TUPD, Herring spent 21 years serving with the Baltimore County Police Department, along with other departments. Though his role was more along the operations side, he feels his experiences with BCPD helped prepare him for his role at Towson by giving him experiences to draw upon.

“I try and learn something every day and certainly I’ve been in the profession now for about 43 years,” Herring said. “I’ve been fortunate enough to learn quite a bit and hope to continue learning.”

During his time as chief, Herring plans to continue improving the transparency of the police department while he serves as chief because he feels it is an important factor in building trust between officers and the community.

“I believe the department always was transparent but I want to increase that as much as I can,” said Herring. “I want the public to understand what we do, how we do it and why we do it.”

“I want to see incident reports with more people thouroughly questioned all the way through,” Keelan said.

Herring also promotes an open door policy in the hopes that Towson community members feel they can always reach out if they need to.

“I’m really happy to continue to serve the community here, and I’m happy to sit down and talk to anyone,” Herring said.