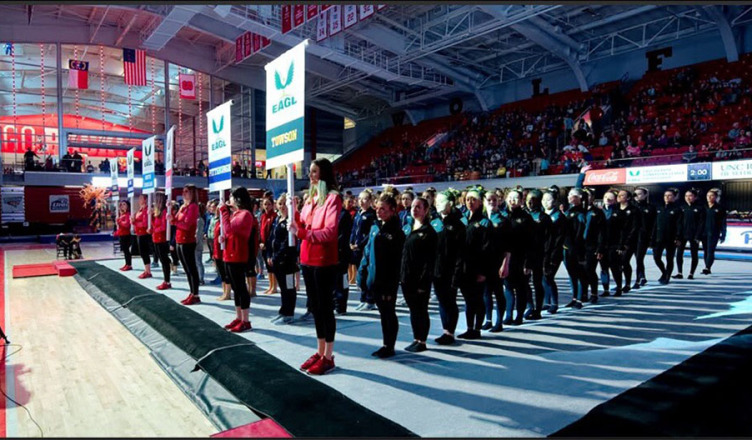 Towson placed sixth at the 2017 EAGL Championships at the Reynolds Coliseum hosted by North Carolina State.

“While we hoped to do better, I am not at all disappointed with this team,” Head Coach Vicki Chliszczyk May said. “To fight through all the adversity we did to put up some of the best scores in program history speaks of the true ability of this team.”

Towson opened the meet with a score of 47.825 on the balance beam which put them behind to start.

“Not performing well on our two strongest events to start the meet had us battling from behind from the beginning, leaving us our weaker events to make up ground,” Chliszczyk May said. “This is not an effective strategy if you hope to perform and score well.”

The Tigers had six top-10 finishes, with junior Tyra McKellar leading the way with a tie for second-place on the uneven bars (9.825) and an eighth-place finish in the all-around competition (39.000).

Sophomore Cortni Baker finished tied for seventh on the uneven bars (9.775) and sophomore Mary Elle Arduino tied for eighth on the balance beam (9.850).

Saturday’s meet was the end of team competition for the 2017 season. Towson is waiting for individual competition regional qualifiers to be announced Monday afternoon. A few team members are expected to be selected for regionals.

“We will work with the girls who have been selected for regionals over the next two weeks before we close the gym up,” Chliszczyk May said. “That’s when we will all have a chance to step back and truly evaluate the season and work on improvements for the coming season.”