Photo by Vincent Engleman/ The Towerlight

Towson ended its weekend with a third-place finish in a quad meet against No. 17 George Washington, Maryland and Rutgers Sunday at the Charles E. Smith Center.

Junior Brittney Ranti impressed for Towson, registering a career-high on the bars with a score of 9.800.

The Tigers closed out the meet with a promising performance on the vault, recording a 48.825 for a second-place tie.

Towson recorded its fourth-highest team score in program history to earn a second-place finish in a tri-meet with George Washington and Rutgers Friday at SECU Arena.

The Tigers tallied eight career-highs to help them post 196.250 points, which was just 0.050 behind first-place George Washington. Rutgers finished third with 193.825 points.

“I was super proud and impressed with the girls,” Head Coach Vicki May said. “We recommitted at the beginning of the week to finish out the season really going after our goals and not holding back. We couldn’t ask for more.”

Towson started on vault as junior Cortni Baker and seniors Gabriella Yarussi and Tyra McKellar each posted career highs. Baker finished second with a 9.900, while Yarussi scored a 9.850 to finish fourth and McKellar scored 9.825 to finish fifth.

On bars, the Tigers took each of the top four spots with four career highs. McKellar finished first with a 9.925, while Baker, junior Mary Elle Arduino and freshman Tess Zientek each tied for second with a 9.875.

“As a bar team, we’re focusing on the little details like handstands all the way up and stuck landings,” May said. “Those were huge improvements from any other meet this season. Cortni Baker had a phenomenal meet.”

On beam, Arduino and Yarussi each tied for third with a 9.875, while Melissa Temkov finished eighth with a 9.750.

Temkov also helped Towson on floor, as the sophomore posted a career high 9.875 to finish second. Baker and Yarussi tied for eighth with a 9.825. Towson did not have anyone place an all-around score.

“We need to keep the confidence and energy going and rolling into the rest of the season,” May said.

The Tigers’ next chance to show that confidence will be when they face William and Mary at Kaplan Arena in Williamsburg, Virginia, this Saturday at 3 p.m. 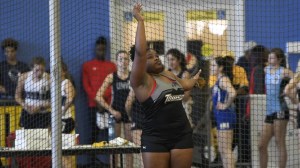