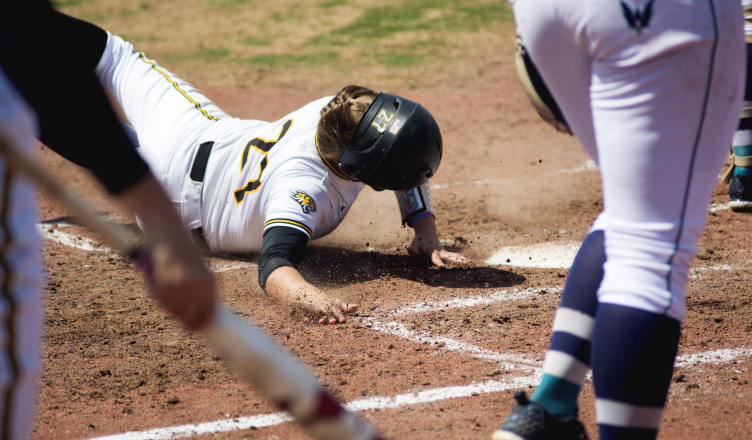 Photo by Owen DiDonna/ The Towerlight

Towson swept UNC Wilmington in a weekend series at home, following a win over Georgetown on the road Tuesday in Washington D.C.

Impressive pitching from senior Megan Dejter kept UNC Wilmington off of the scoreboard. She allowed just one hit the entire game and recorded a season-best eight strikeouts.

After four scoreless innings, sophomore infielder Madison Wilson recorded her 60th hit of the season with a two-out RBI single to center. The hit scored sophomore Jaclyn Mounie and proved to be the game-winner.

Shortly after, junior Nicole Stockinger hit a two-run home run to right field to give Towson a 3-0 advantage.

UNC Wilmington fought back and tied the score in the top of the sixth inning with three quick RBIs, however.

In the bottom of the seventh, senior outfielder Kendyl Scott delivered the game-winning hit with a walk-off single for the Tigers.

In game two, UNC Wilmington took an early 2-1 lead in the top of the second inning, but Wilson responded with an RBI single, scoring junior infielder Kaylen Minnatee to tie the game.

Towson extended its lead to 5-2 after Miko’s three-run double in the bottom of the second inning, which scored Edwards, Wilson and freshman Riley Thies.

In the third inning, Scott hit a two-run triple to center field, which scored Minnatee and senior catcher Shelby Stracher to give the Tigers a 7-2 advantage.

The Seahawks attempted a comeback with a solo home run in the top of the fourth, but the Tigers responded with six runs to put the game out of reach.

Following a three-run RBI by Thies, Wilson completed the fourth inning with a single to right field, scoring Scott and putting the Tigers up 13-3. Towson held on to win the game 13-3.

Tuesday, the Tigers rolled past the Hoyas (13-33, 4-10 Big East) 12-1 in a non-conference tournament at the Nationals Youth Academy in Washington D.C.

In the top of the first inning, Miko gave the Tigers an early lead with a two-out, two-run home run.

In the top of the second inning, Wilson hit a two-run home run to left center field to increase Towson’s lead to 5-0.

Georgetown responded with an RBI single in the bottom of the second. This was the team’s first and only score of the day.

In the third inning, Towson stretched its lead to 7-1 with two hits from Baltazar and Minnatee, which scored Miko and Baltazar, respectively.

Later in the game, Scott hit a two-run single that scored Minnatee and Stracher to give the Tigers a 9-1 lead.

In the fifth, Scott followed up with an impressive three-run home run to left center, scoring herself, Mounie and junior outfielder Kendall Arcia to lock up the win.

Next up, Towson will host Delaware State in a doubleheader on Tuesday, April 24. First pitch is set for 3 p.m.