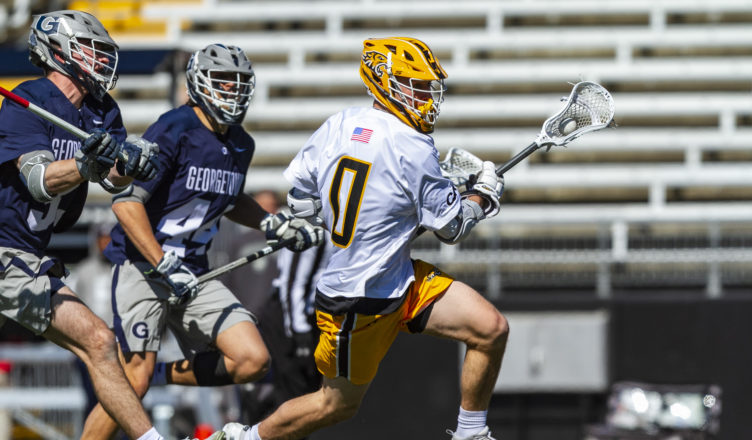 The Tigers’ rough start to the season continued against No. 13/12 Georgetown. The Hoyas took the lead in the first quarter and never looked back, defeating Towson 16-4.

“It’s difficult to win a game when you can’t do the simple things on the field and we did that right from the start,” head coach Shawn Nadelen said. “We had a lot of mistakes early on.”

Despite struggling to win faceoffs so far this season, the Tigers went 5-8 in the first quarter. Nevertheless, Towson continues to have problems with securing the ball for sustainable possessions, elongating sufficient scoring opportunities as the team committed seven turnovers in the first quarter.

“It was very frustrating when it’s the simple, fundamental plays in a game that need to be made and we’re not able to execute that,” Nadelen said.

As a result of the Tigers early miscues, Georgetown pounced on the offensive zone opportunities,  firing 16 shots on net, six of which found the back of the net. Towson only took four shots in the first 14 minutes of the quarter. With 1:07 remaining in quarter one, junior midfielder Greg Ey scored his third goal of the season to put the Tigers on the board.

“We were unraveled right from the start in this game,” Nadalen said. “And not that it got that much better throughout, but when your facing obviously a team that was outplaying [us] as well as Georgetown is, they capitalize on it. Kinda jammed it right back down our throats, and we just didn’t respond great.”

The Hoyas added another three goals in the second quarter and led 9-2 at halftime. Less than a minute into the quarter, senior attack Brody McLean scored Towson’s second goal of the game. This was the only made shot of the five the Tigers attempted on goal in the quarter.

“There’s no doubt that our guys care, our guys are working hard,” Nadelen said. “We are just not a mentally strong team, unfortunately, right now and it’s leading to our miscues on game day. We gotta do our best to correct that during the week.”

Georgetown added to their lead in the third quarter, adding another three goals despite Towson taking three more shots. Redshirt senior midfielder Grant Maloof connected with freshman attack Andrew Milani for the Tigers only goal of the quarter with 5:56 left.

Senior midfielder Jon Mazza scored just over a minute into the fourth quarter, but Towson was shut out for the last 13:50 of the game. The Hoyas won on ground balls and faceoffs in the quarter, with 11 ground balls compared to the Tigers five. Georgetown also won five of the six faceoffs, and went 23 of 23 in the clearing game.

“This is as tough a time as it comes in regards to lacrosse,” Nadalen said.

Redshirt junior Shane Brennan started in goal for Towson, he saved three shots but gave up six goals in the first quarter. Junior goalie Jake Stout entered late in the first quarter and finished the game for the Tigers. He surrendered 10 goals but saved six shots.

Towson returns to Johnny Unitas Stadium against the No. 12/13 Duke Blue Devils on Saturday, March 14 at noon.

“We shouldn’t have any pressure,” Nadalen said. “I mean we’re not anywhere close to being relevant, let’s be honest. So the pressure is nowhere near us. The pressure is on us to actually play the game of lacrosse the way it can be played.”