What a week for Towson on its home floor. Saturday, the team defeated William & Mary in the final seconds of regulation, while Thursday they defeated Drexel in double overtime.

Saturday afternoon gave Towson fans a few extra gray hairs. The team struggled in the first half to find any rhythm offensively. They went into the locker room down 46-33 in large part to 12 turnovers.

The start of the second half didn’t get any better for the Tigers. They found themselves in a 17-point hole just four minutes into the half. As the half progressed, however, the Tigers buckled down defensively and began to chip away at the deficit.

Ten minutes in, William & Mary had gone ice cold from the field while Towson was beginning to heat up. Towson was closing in, down by only five points with 9:45 left in the game.

“I’m really proud of our kids just for fighting and hanging in there,” Head Coach Pat Skerry said. “These are my guys, they’re tough suckers.”

With 24 seconds left in the contest, Towson found itself down by one point with possession of the basketball. On the ensuing inbound, junior guard Brian Starr took the ball to the top of the arc and dished to fellow junior guard Mike Morsell on the flank. Morsell connected for a three-point bucket to give Towson an 82-80 lead with 10 seconds left.

“That’s probably the biggest shot of my career so far,” Morsell said. “That was a big shot. Coach Skerry told me to have my feet ready to shoot, but the dude jumped out early, so I just pump faked and shot in rhythm, and it went in.

Thursday night was a nail-biter inside SECU Arena. Towson saw its 11-point lead disappear late in the second half as Drexel battled to force two overtimes. It could have been a demoralizing loss for the team, but Towson hung on to win 104-103.

“It’s a committed group,” Skerry said. “We got guys that are disappointed in the way they finished the game in regulation. You like [that] as a coach but we told them enjoy it tonight and we’ll clean up the rest of it.”

After taking a 75-64 lead with 5:26 left in the game, the Tigers went ice cold from the field and shot an abysmal 25 percent. However, they were able to knock down their free throws to prevent Drexel from stealing a win in regulation.

In the last seven seconds of the first overtime period, Baltimore’s own Kurk Lee kissed a layup high off of the glass to tie the game 96-96. Towson had the chance to go down and win the game, but Davis missed a three-pointer at the buzzer.

The Tigers had three three-point leads in the first overtime session but were unable to put the Dragons away.

“I was proud that they were able to flip the script,” Skerry said. “I thought we had a couple of good looks, both regulation and overtime but it’s important that guys don’t linger on the last play and move on to the next. I thought these guys did a good job of that.”

Midway through the second overtime, both teams were tied 101-101 until Lee put Drexel up by two after knocking down a jumper. In Towson’s following possessions Davis hit a free throw and Morman hit a pair to give the team a 104-103 lead with 43 seconds left. Fortunately for Towson, lightning didn’t strike twice as Lee missed two shots as the clock expired.

“Give Drexel a lot of credit,” Skerry said. “They really did a good job of mucking up the game and making it difficult. We were just never able to put them away.”

Towson will conclude its homestand Thursday against Hofstra before taking to the road for a rematch against Drexel Saturday. 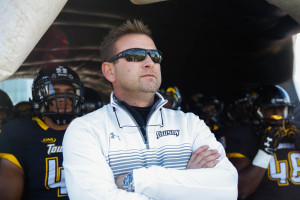