“I was very pleased with what I saw,” Head Coach Mike Jackson said. “We had a tough week of practice and did a lot of hard work in the weight room. Some people were really putting a lot of emphasis on performing well for their friends, families and fans and they did just that.”

“It was a good race,” Jackson said. “We put Zanae on the four by four and we hadn’t put her on there for quite a while, and everybody did their part. We won our race which was important and then we were able to achieve a school record so it was great to see.”

“[The 4×100-meter relay] was even more impressive,” Jackson said. “One of our athletes who was on that original relay sat out just to fuel up a little bit. I was very impressed with the relay we put together and we didn’t have a lot of competition that was close to us so it’s good to see how well we did.”

“That was impressive and probably a little bit more than we expected at this time,” Jackson said. “She won the overall race by three seconds, but she ran it very well and we’ll build on that and try to see if we can potentially run another 400 race sometime soon.”

Sophomore Lauren Coleman placed second in the shot put event and set a new school record with a 14.48-meter throw.

“She’s having a great year,” Jackson said. “Ever since coach [Jeff] Rebholz got here she’s been working really well with him and working on her craft and really putting in the time to get better. It’s great to see and we’re looking forward to seeing how she performs when it matters most at our conference championship.”

Towson will split squads this coming weekend and compete in the Morgan State Legacy Meet and the Princeton Larry Ellis Invitational.

“The majority of the team will be at Morgan State and a handful of distance runners will go to Princeton because it’s a good meet for them,” Jackson said. “It fits them well and last year we won at Morgan State so we’ll hope to do the same thing this year.” 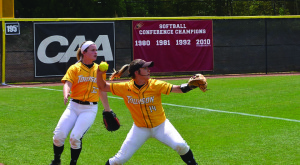