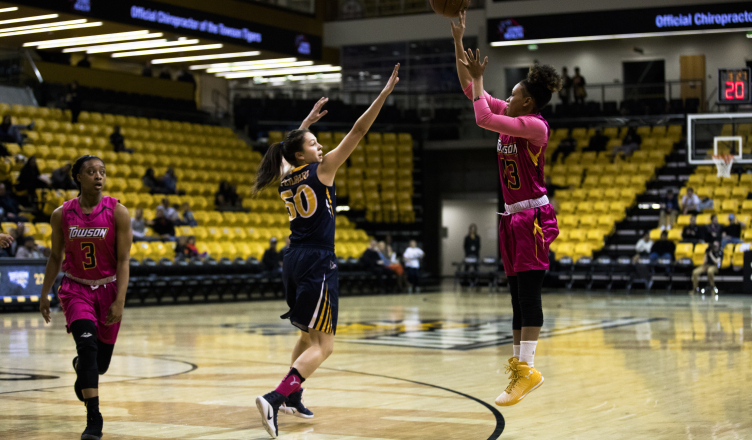 “It was a tough game,” Head Coach Diane Richardson said. “We had some deficiencies, but James Madison is a very good team.”

The visitors jumped out to an early 8-2 lead, but sophomore forward Nukiya Mayo and junior guard Danielle Durjan hit a pair of three-pointers to knot the score up for Towson. James Madison later hit two jump shots to take a 12-8 lead going into the second quarter.

The Dukes continued their hot shooting in the second, mounting a nine-point lead thanks to two quick jumpers from junior guard Logan Reynolds. Durjan and Mayo responded once again with two jumpers, but Towson struggled shooting for the rest of the period.

Towson shot an atrocious 23 percent from the field in the first half, and trailed 28-17 going into the break.

“We need to increase our assists,” Richardson said. “Sometimes they feel it and sometimes they just shoot quick shots. We’ve got to get that under control, especially with our shooting percentage.”

Towson did not fare much better in the third, as James Madison went on a 9-0 run midway through the period and took a 48-32 lead going into the fourth.

Towson entered the final quarter looking like a different team. They played physical on defense and converted on scoring opportunities. The home team went on a 6-0 run to cut the deficit to 12, but James Madison held a double-digit lead for much of the stanza.

Despite trailing 58-45 with just under four minutes left to play, the Tigers rallied late. The Tigers went on their second 6-0 run of the period to cut the Dukes’ lead to seven with under a minute left in the contest.

Towson played the foul game, but James Madison hit enough of its free throws to secure the win.

“We did some things today that made me proud of them defensive-wise,” Richardson said. “I was proud in the fight that we had today.”

Towson put together a strong fourth quarter performance in its 73-72 win over Hofstra Friday night at SECU Arena.

Mayo, senior forward Mary Cuevas and redshirt senior guard Raine Bankston all finished with double-digits, but the most important points of the game came at the charity stripe.

After giving up a layup to the Pride, the Tigers trailed 72-71. However, Mayo was fouled on the next possession and drained two free throws to give the Tigers a one-point lead.

Towson looks to continue its strong play Friday, Feb. 16, when the team battles Northeastern at Matthews Arena. Tipoff is set for 7 p.m.