Towson split a pair of matches this weekend falling to Drexel 2-0 Sunday, but earning its first win against Delaware in seven years with a 1-0 shutout Friday. 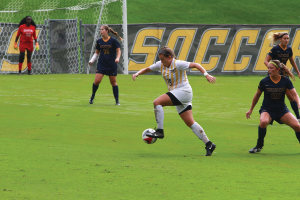 Drexel scored two early goals to put Towson on its back foot for the entire game. Junior midfielder Madison Dunn gave the Dragons the lead with the first shot of the game.

Senior goalkeeper Taylor Sebolao punched a cross away, but Dunn collected the ball and fired it into the net.

Sophomore forward Vanessa Kara doubled Drexel’s lead 26 minutes in as she weaved past three Towson defenders before shooting past Sebolao.

“I told the team at halftime we acted like we were surprised this was a contact sport,” Head Coach Greg Paynter said.

Towson created more chances and freshman forward Elizabeth Coletti hit the crossbar with 10 minutes left in the match, but the Tigers could not find the net and lost 2-0.

On Friday, Towson defeated rival Delaware for the first time in seven years. The Tigers constantly pressured the Blue Hens (3-9-0, 2-1-0 CAA) by exploiting space on the flanks as the Blue Hens were content to stay narrow.

After earning two corner kicks and two shots, Towson took the lead just over 11 minutes into the game. Senior midfielder Emily Marshall collected the ball after a possession from Delaware and lifted a pass to senior attacker Natalia Pinkney.

Pinkney then sprinted pass two defenders, before shooting past redshirt junior goalkeeper Kailyn Rekos who came off her line but could not smother the ball.

“To get a win against Delaware who was ranked number one in our conference coming into this game feels great,” Pinkney said.

The Blue Hens improved as the first half went on and took 10 shots, four of which were saved by Sebolao.

In the second half, the Tigers defense thwarted the Blue Hens at almost every turn. They held Delaware without a shot for the first 34 minutes of the half.

Despite a shot on goal from Blue Hen freshman forward Jillian Vassallo, the Tigers held on for the 1-0 win with relative ease.