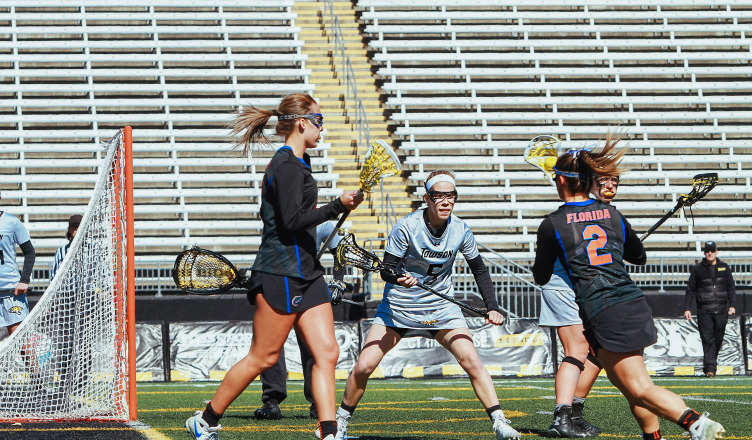 No. 15/20 Towson put forth a strong offensive performance in its 22-5 victory over Stetson Sunday afternoon at Johnny Unitas Stadium.

Junior midfielder Kaitlyn Montalbano scored an early first half goal to spark a 12-0 run by the Tigers. Sophomore attacker Natalie Sulmonte scored twice during that run, and junior midfielder Emily Gillingham also put in a goal.

A Stetson free-position goal ended Towson’s run, but Gillingham and Montalbano each found the back of the net to give the team a 14-1 lead going into the locker room.

Head Coach Sonia LaMonica was pleased with the play of Sulmonte and senior attacker Samantha Brookhart in the win.

“Nat has a huge impact on the draws and she really showed her dominance today and was able to allow us to have a lot of offensive opportunities,” LaMonica said. “Sam played a great role behind the crease, and she’s always got her vision up.”

Sulmonte and Brookhart combined for seven goals and eight assists to lead the scoring effort.

“Our girls played hard from the opening draw and were able to generate lots of looks,” LaMonica said. “Overall, I’m glad with how they played today.”

Towson had 10 different goal scorers in the game. This was the most since the team had 10 players score against Old Dominion in the NCAA Tournament last year.

“We had our players and our middies in the elbows pressing out, getting out on the ball and applying that pressure which makes it difficult offensively to move the ball quickly,” LaMonica said.