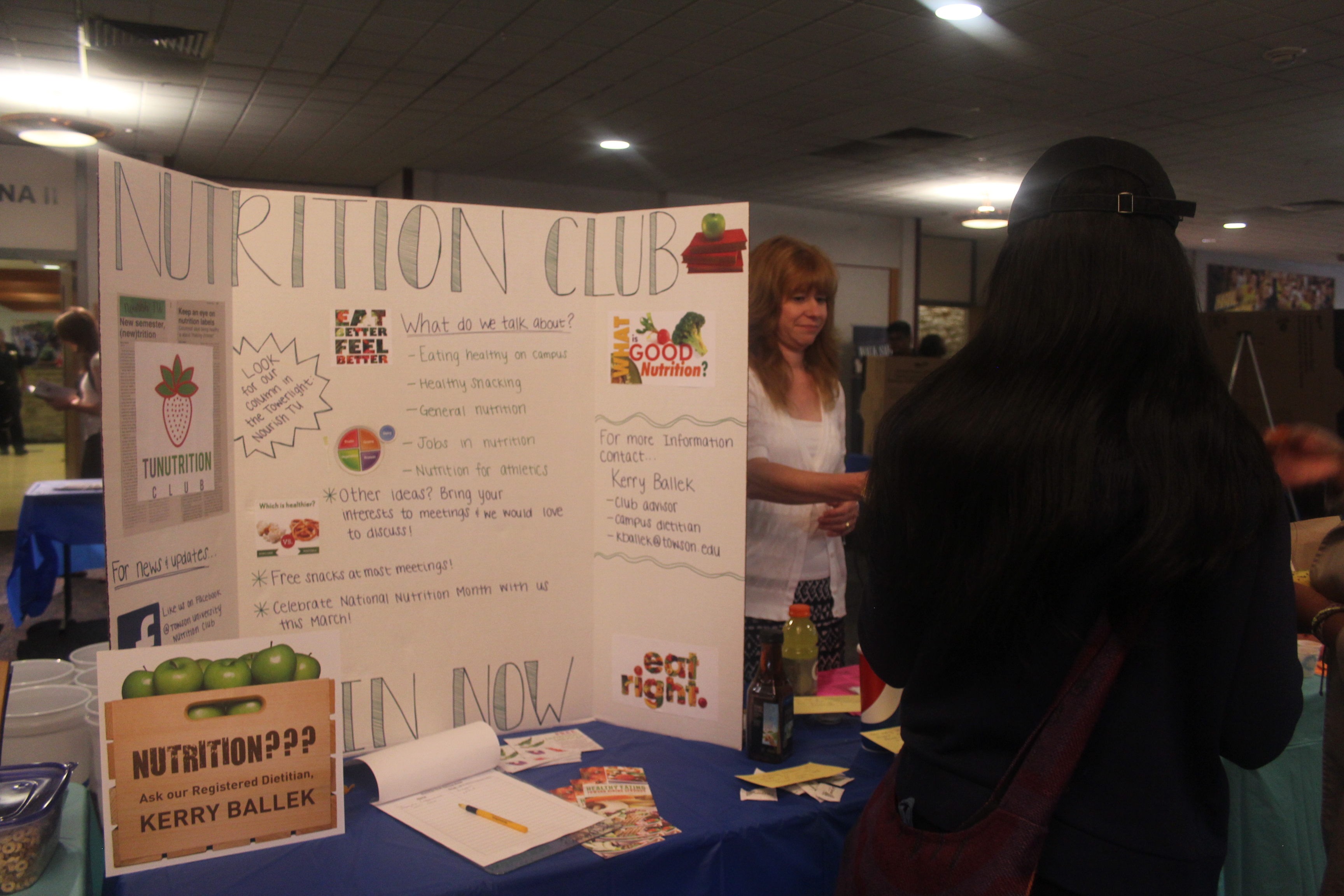 Student Health Services educated Towson students about healthy living during their “Eating Well & Being Active” event on September 21 in the University Union.

Students were given a punch card that they carried with them to each of the ten stations where they learned about everyday eating and physical activity habits they can adopt to improve their health. After having their card punched at all of the stations, students could take a free T-shirt.

The event included free food such as vegetables served with hummus, bruschetta made from tomatoes grown a campus garden, bike-powered smoothies, and “banana dogs”—a spin on the peanut butter and banana sandwich—served on a hotdog bun with an assortment of almond and peanut butters.

Junior exercise science major Lauren Mouling said she plans to incorporate some of the recipes demonstrated at the stations into her daily life.

“The smoothies were a healthier option than the regular milkshakes and things like that that we usually get,” Mouling said. “Making it yourself is cheaper and better overall.”

Senior Marc Vassar, an exercise science major who wants to become a physical therapist, stopped by the banana dog station to sample some food.

“Bananas are a great source of potassium and relieve muscle cramps which is good after you work out,” Vassar said.

Vassar, who is a vegetarian, cautions against eating too much meat. Meat and other foods that are high in cholesterol can put people at a greater risk for heart diseases, strokes and other diseases, he said.

“You want to have that artery smooth and clear for blood to travel through,” Vassar said.

Professor Andrea Barton, an exercise science professor in the Department of Kinesiology, led students through pushups and flexibility tests to assess their fitness level.

She explained that these factors put people at risk of developing atherosclerosis, or plaque buildup in the arteries. When arteries are blocked, it becomes difficult for blood and oxygen to pass through which can lead to a heart attack.

Barton said being physically active can reduce some of those modifiable risk factors. She suggested students should do a minimum of 30 minutes of moderate intensity, aerobic physical activity five days a week or 20 minutes of vigorous activity three days a week.

The Department of Kinesiology will be offering students a free full physical assessment on Dec. 8 in Burdick Hall to measure heart rate, blood pressure, body composition, heart health, muscular fitness and flexibility, according to Barton.

Bartson said that she thinks “students might feel they’re immune” to heart and health issues, because of their age. But, she said, things like plaque buildup in arteries can begin to happen in the early 20s.

At the Nutrition Club station, registered dietitian Kerry Ballek educated students about the nutritional value and sugar content of various foods and drinks.

The key components of a nutritious diet are moderation, balance and variety, Ballek said.

She explained that even though Towson has many all-you-can-eat dining locations, that doesn’t mean students should eat all they can eat. Ultimately, Ballek urged students to be mindful of the foods they are consuming.

“Don’t just grab Chick-fil-A all the time because there’s no line,” Ballek said.