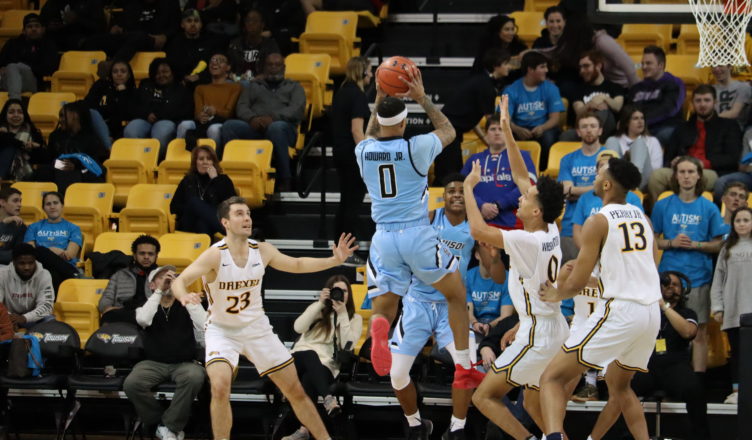 Towson dropped consecutive Colonial Athletic Association (CAA) contests on the road to Northeastern and Hofstra over the weekend.

“Northeastern did a good job defensively on Fobbs, but where we lost the game was our inability to take care of the ball,” said Head Coach Pat Skerry. “We had a disappointing second half stretch where we turned it over six times in 10 possessions and guard play just has to be better in that area to beat a team of that caliber.”

This bad stretch came during a nearly six minute stretch in the second half in which the Tigers failed to score. Not only was ball security an issue, the Tigers could not seem to connect from downtown as the team shot 0-for-9 from three-point distance in the second half and 2-for-14 for the game.

Despite four Towson players scoring in double figures, the Tigers fell in double overtime to the No. 1 team in the conference, the Hofstra Pride (23-6, 13-3 CAA).

Junior guard Brian Fobbs led the way with a game-high 29 points along with six rebounds. Sanders tallied 16 points and a season-high 11 rebounds. Redshirt junior forward Dennis Tunstall recorded his first double-double of the season with 11 points and 10 rebounds.

Skerry was pleased with his team’s efforts despite the tough road loss.

Towson dominated Hofstra with 54 points in the paint along with 18 offensive rebounds that turned into 22 second-chance points.

With well-rounded performances from multiple players, it is tough to let a conference game like that slip through your hands.

“We had our chances against Hofstra and like any game, there are always things you could improve upon,” Skerry said. “For us, when we guard, rebound, and take care of the ball, we have shown that we can be right there in the game every night.”

Up next for Towson are the team’s final two home games. The Tigers will recognize their student athletes’ academic performance before they take on William & Mary on Thursday, Feb. 28 at 7 p.m.

Towson will follow up that game with Senior Day/Black Student-Athlete Celebration as the Tigers face Elon at SECU Arena on Mar. 2 at 2 p.m.