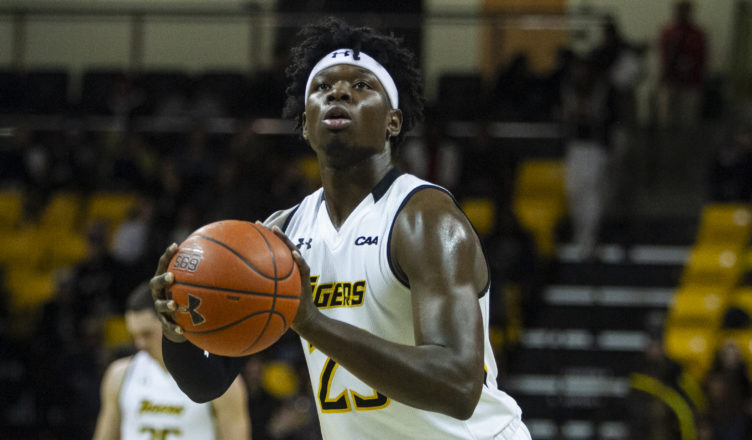 “He was absolutely sensational coming back home,” Skerry said to Towson Athletics. “Holy smokes, Betrand was good. You know what he told me in the huddle, he said, ‘I got this.”

The first half was very competitive, through the first 14 minutes neither team led by more than six points. Late in the half the Dragons 13-12, 6-6 CAA) went on an 8-0 run and led 29-19. Towson responded, and with 1:19 before halftime Betrand hit a three to cut Drexel’s lead to three points. The Dragons hit two three pointers in the final minute and took a seven point lead into halftime.

The Tigers struggled from three-point range in the first half, Betrand hit their only three pointer in five attempts while Drexel shot 41% from behind the line.

“We really needed this win really bad,” Betrand said to Towson Athletics. “To score a career-high points in my hometown is so special to me. Everybody played their part and did what they were supposed to do. Everybody made big shots and that’s what we needed. (Dennis) has always been big for us and he showed it again today. He’s probably our best defensive player.”

Towson hit 10 of their 11 free throws in the second half, and ended a two-game losing streak. The 10-point deficit the Tigers faced late in the first half was the largest they came back from to win this season.

Redshirt senior forward Dennis Tunstall’s performance did not show up in the box score, with four points and five rebounds. But his effort late in the game helped to seal Towson’s victory. He took a charge that prevented a fastbreak and the Dragons from taking the lead. He set a screen that allowed Fobbs to hit a three and blocked a shot with a minute left.

“The best part of that stretch for me was the block because I like blocking shots,” Tunstall said to Towson Athletics. “I saw the opportunity and I went up and got it. When we’re faced with adversity and times come like this, it’s a great feeling to be able to help the team win. We continued to fight as a team to get this win today. Coach got on us at halftime, but we turned it around.”

It was also the second time in three years the Tigers overcame a double digit deficit against Drexel in Philadelphia.

Towson looked to bounce back from a tough loss against Charleston, but despite a late rally they fell just short as Delaware came out with the 84 –78 victory.

Betrand led the Tigers with 23 points, while Blue Hens (18-7, 8-4 CAA) redshirt junior guard Nate Darling led all scorers with 34 points shooting 7-13 from behind the three-point line.

“We dug ourselves a hole early, we didn’t guard great all night,” Skerry said to Towson Athletics. “We were horrible defensively in the first half that’s not who we are.”

After Towson scored the first basket of the game, Delaware went on to make seven of its first 10 3-point shots to break out to a 29-17 lead ten minutes into the game.

Three-point shooting was a huge factor in the first half for both teams. The Blue Hens converted half of their three point attempts hitting 9-18 while the Tigers struggled from beyond the arc, only making four of 14 attempts.

At halftime, Delaware held a 42-32 lead as Nakye Sanders hit a layup with 40 seconds left to close the half.

“I like the group, I’ve always liked the group but we’re better than what we showed early,” Skerry said to Towson Athletics. “And the bottom line is if we don’t guard at a high level, we’re gonna struggle to have success against good clubs.”

In the second half, a Betrand three cut Towson’s deficit to six points. The Blue Hens responded with a 10-2 run and held the Tigers without a field goal for nearly seven minutes. Trailing 58-43, Towson tried to come back, and an 11-2 run cut Delaware’s lead to six points.

“Some good effort in the second half, especially by younger guys like Nic and Allen,” Skerry said to Towson Athletics “That was encouraging but we’ve gotta be better at what we’re supposed to do for 40 minutes.

The Tigers kept it competitive, and with 21 seconds left, redshirt freshman guard Nicolas Timberlake hit a three and Towson trailed by three points. Despite a glimpse of hope, the Blue Hens hit their final six free throws to seal the win.

“We fought back, got back, but I thought we took a couple quick shots when it was a one possession game.” Skerry said to Towson Athletics.

The Tigers return home to SECU Arena against Regent University on Wednesday, Feb. 12 at 7 p.m.