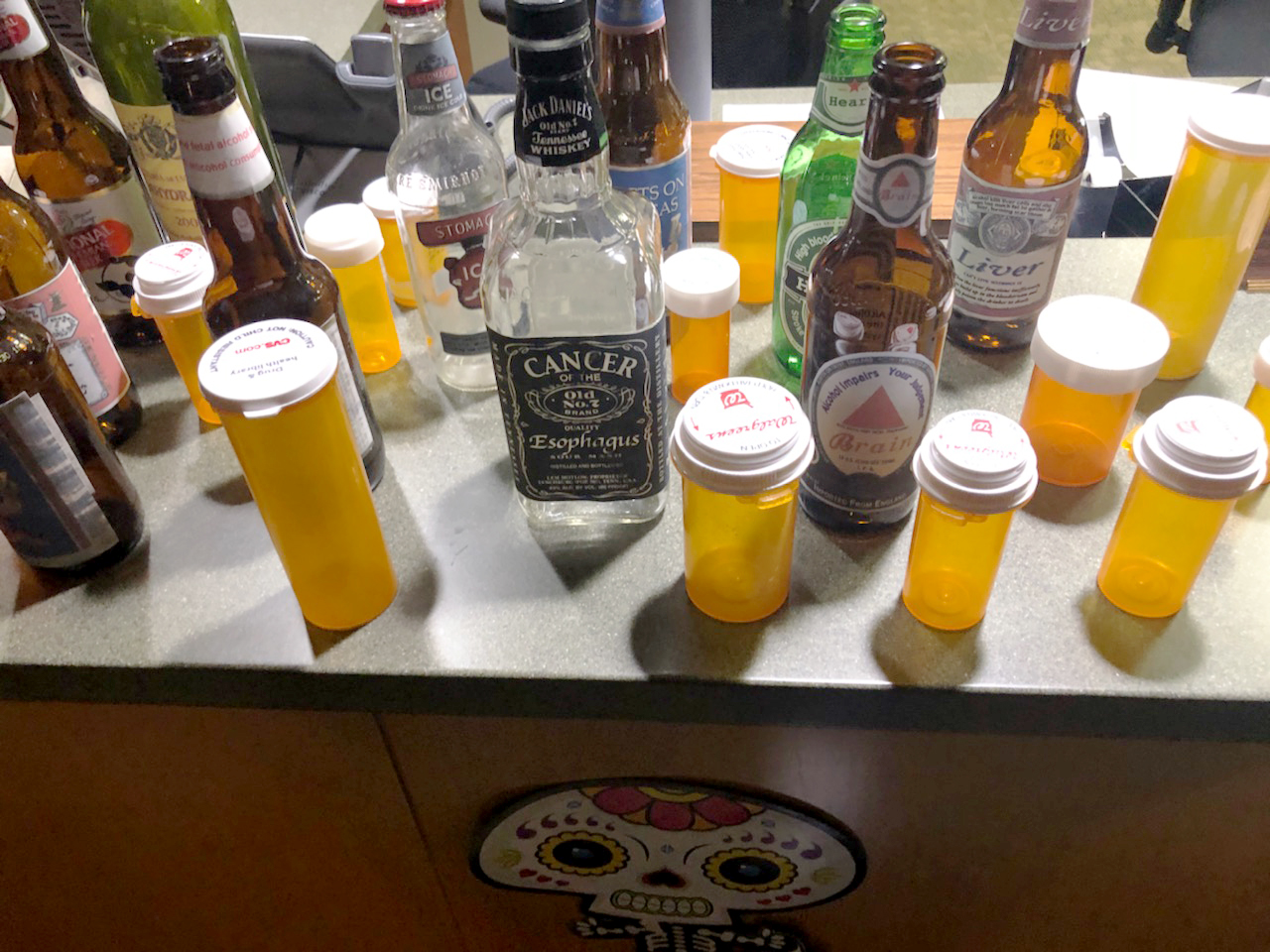 Photo by Ave’on Laine/ The Towerlight

The Health and Counseling Center hosted their annual Halloween party Tuesday night, where students had the opportunity to learn more about safe partying.

For several years now, The Health and Counseling Center has hosted a Halloween-themed party at the end of the month, with this year’s theme centered around the Rocky Horror Picture Show. The party usually includes decorations corresponding to the theme and various, interactive health education booths set up throughout the building.

Allison Frey, Health Educator for Alcohol and Drugs at the Counseling Center and co-director of the Alcohol, Tobacco and Other Drugs Prevention Center, said that the Health Center started the party while it was located in the white house, formerly called Glen Esk, across from Ward and West to talk about risks associated with binge drinking and shots, among other activities.

“Our main focus tonight is just learning how to be social without alcohol or drugs, but then also having some more education around,” Frey said. “We have all our peer educator groups set up, so they all have different things that they talk about, and really just emphasize that role as a peer educator.”

Many students interacted with the student leaders and other booths, and some took away new information from the experience.

“I wasn’t aware that alcohol could have effects on parts of your body other than the brain and the liver, such as the pancreas and even the lungs, so the alcohol bottle display with the facts written on the labels was really creative and helpful,” said sophomore Brianna Staples.

Scattered around the first and second floors of the Health Center were numerous poster boards printed with sayings such as “Be a responsible Tiger,” “Rethink your third drink,” and a sign with a marijuana leaf that read “Keep off the grass!”

These, and other billboards with wellness and hotline information were on display, serving as safety reminders for students.

The second floor of the Health Center was where the bulk of students gathered. It was complete with a table of food and decorated cupcakes, an open floor for karaoke, an outside space with a cotton candy machine and screens with Halloween movies playing. A bathroom decorated with a fake body and fake throw up around the toilet, along with as a fake body in the middle of the main floor with a missing head and alcohol bottles with warning labels, were points of attraction for students.

“My favorite thing about the event is the decorations, and the education about alcohol and having sex on campus, and just getting everybody woke and aware of the safety and health issues on campus,” said sophomore Aisha Olemba.

The party was intentionally held on Halloween Eve, and many students came dressed in costume.

“We know we won’t get many during Halloween night typically so we try to do it before hand, and it ties in nicely with homecoming too,” Frey said.

The Health and Counseling Center is located at Ward and West near the College of Liberal Arts and the Residence Tower, and is open Monday through Friday to assist students with health issues, counseling issues and more.