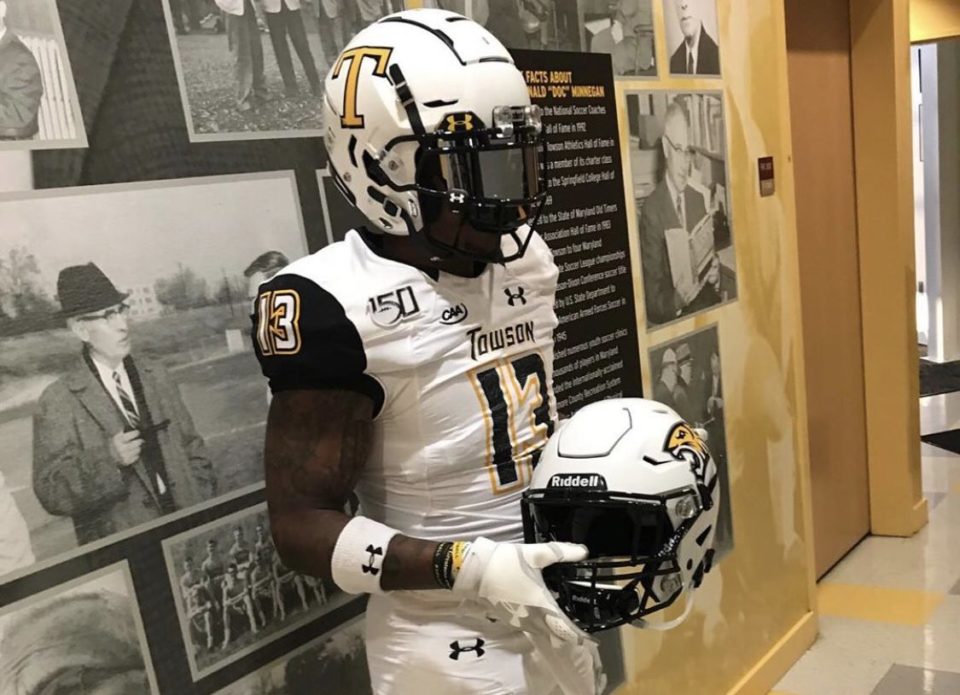 Amid all of the expectations surrounding the football team, the equipment staff caught the eyes of fans with the release of a new, white helmet for this season.

The helmet was shown off on Towson Equipment’s Instagram with a white jersey and pants combination, modeled by redshirt senior running back Shane Simpson, at the beginning of August.

“I was very excited that coach Ambrose let me model the uniform,” Simpson said.

A separate picture was released, showing the white helmet with both the Tiger head logo as well as the throwback “T” logo that was featured on the team’s 50th anniversary uniform last season.

“They’re awesome, it’s sweet to get a second helmet like that,” said senior kicker Aidan O’Neill. “I thought the yellow helmets were as fresh as we could get, but now we’re going to look even fresher this year.”

While the Tigers’ uniforms have been predominantly black in recent years, the team has wanted new helmets for a few years, according to head coach Rob Ambrose, but the program finally had the budget to pull the trigger.

“When I took this job, we needed black helmets as a program to make a statement,” said Ambrose. “As the decade has passed, the need for two helmets has arisen. There was no question in my mind that we needed to go back to the white. It was just a matter of finding the money to get that done.”

The flexibility of a second helmet not only creates options for the current set of uniforms, but also provides a nod to Towson history.

“Having the white helmets, along with the black, shows where we are now but also where we’ve been,” Ambrose said.

With three of the first five games of the 2019 season being on the road, there are plenty of chances for the white helmet to make an appearance.

“Definitely, we will wear the white and it will give us options as to what logo we use and try to keep it interesting,” Ambrose said.