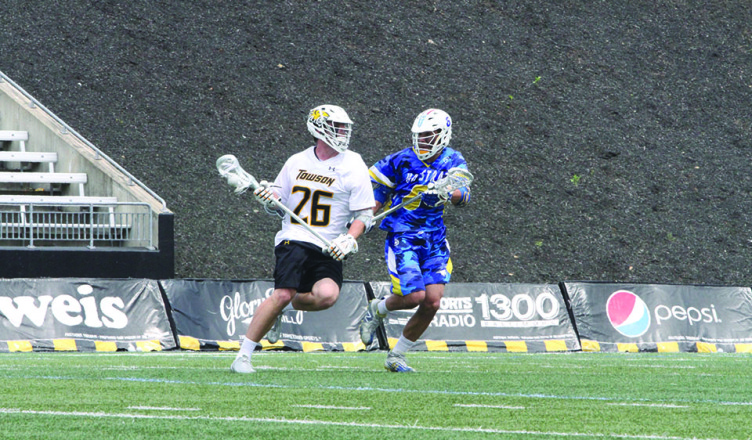 A 4-0 third-quarter Saturday clinched Towson home field advantage in the 2017 Colonial Athletic Association (CAA) Tournament and a 10-8 victory over rival Hofstra in the regular season finale.

“I’m excited for our program and especially our seniors to finish out the regular season by earning the regular season championship for the CAA,” Head Coach Shawn Nadelen said. “I’ve been emphasizing to these guys all week how important it was to come out engaged and aggressive. They responded.”

Just minutes into the second quarter, Hofstra jumped out to a 3-1 lead. Junior attacker Brendan Kavanaugh and freshman attacker Ryan Tierney found the back of the net for the team.

Following Hofstra’s fast start in the second quarter, Towson responded with two goals of its own to tie the game 3-3. During that run, senior attacker Joe Seider and senior midfielder Tyler Young scored for the team.

The Pride broke the Tigers’ run and scored with 9:59 left in the second, but Towson senior attacker Ryan Drenner ripped a shot into the goal with five seconds left in the half to tie game 5-5.

“In a game like this where it’s obviously tightly contested, to get that one late in the half to send you into halftime with momentum was awesome,” Nadelen said. “I don’t know if that propelled us into the third quarter with that momentum, but I think our guys were definitely excited to execute that.”

In the third, Towson shut down Hofstra’s attack while scoring four goals to take an 8-4 lead into the final stanza. Young and Seider netted two goals each during the run.

“Towson-Hofstra games, it’s just a slug fest,” Hofstra Head Coach Seth Tierney said. “It got away from us in the third quarter.”

In the fourth quarter, junior midfielder Dylan Alderman scored two goals to pull the Pride within two goals of the Tigers with 9:17 left in the game.

Towson and Hofstra exchanged goals for the rest of the game, until time ran out on Hofstra and Towson held on for the win.

“We just got the defense moving. We weren’t settling for the first shot,” Young said. “We were just being patient with the ball and their defense kind of opened up. Drenner was doing a great job of finding the shooters, and the shooters were able to finish today.”

In the previous four semifinal meetings with the Dragons, the Tigers have won three games, with their only loss coming in 2014.

In one meeting with Drexel this season, Towson came away with an 8-7 road win in Philadelphia at Vidas Field.

“When you get to this point in the season everyone is dangerous,” Nadelen said. “It’s a great opponent, a great challenge. They are a very capable team.”